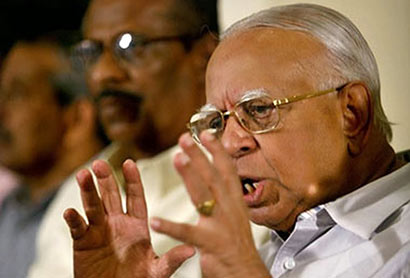 President Sirisena is scheduled to leave for India on Sunday on his first State visit after assuming office on January 9, following a victory over his predecessor Mahinda Rajapaksa.

The TNA supported Mr. Sirisena in the presidential elections, in a rare convergence of diverse political forces, including Sinhala-nationalist and Muslim parties. While the President got a considerable share of the rural Sinhalese votes, the votes from northern Tamils, Muslims in the east and plantation Tamils were crucial to his victory.

Observing that the northern Tamils had made “a substantial contribution for regime change”, the TNA veteran said they looked upon President Sirisena, “who is not extremist or nationalist in thinking” to bring about some “radical changes.”

The political solution that the TNA contemplates is within the framework of a “united, undivided Sri Lanka”, said Mr. Sampanthan who, after decades, attended the country’s Independence Day ceremony on February 4, a gesture that drew strong criticism from some within his party.

“We hope that the President, perceived as a leader who recognises the pluralistic nature of Sri Lankan society, will consider the constitutional changes for different regions to exercise a substantial measure of devolved powers”. There are similar constitutional arrangements in India, he said, adding that the countries needed to engage on the basis of an idea of shared sovereignty. Considering that India has been involved in Sri Lanka’s national question for decades, New Delhi should continue engaging with Colombo contructively, he said.

“The 1987 Indo-Lanka Accord is an international treaty that no one party can unilaterally abrogate. The former government made a series of promises to New Delhi but they were not kept,” he said, in an apparent reference to Mr. Rajapaksa’s assurance to India that he would implement the 13th Amendment and “go beyond”.

On the TNA’s response to the Sirisena government’s recent move to release 1,000 acres of land earlier taken by the army for its high security zone, Mr. Sampanthan said he could not comment on that as the details were awaited. The TNA’s position, he said, has been that persons displaced by the war should be allowed to return to their land. “The government may have some legitimate concerns over security, but now we don’t have the LTTE or the artillery,” he said, questioning the need for high security zones in such a context.

On the resolution passed by the TNA-led Northern Provincial Council last week, on the Sri Lankan government’s “genocide against Tamils”, Mr. Sampanthan said it reflected consensual thinking among the members of the provincial council. “I respect their views. They are not seeking revenge, but they want reconciliation on the basis of truth.”

2 Responses to “Delhi must push Colombo on devolution” – Sampanthan