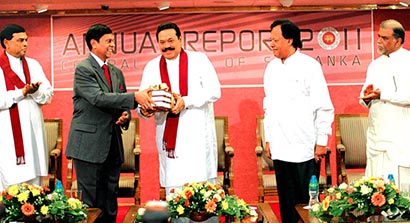 The government’s objective is to guarantee that the dividends of the highest economic development that the country has so far achieved, reached the remotest corners of the country, including the North and East, President Mahinda Rajapaksa said yesterday.

President Rajapaksa said the country was able to maintain an economic growth rate of 8.3 percent last year and the per capita income increased to US $ 2,835. He said unlike in the past, more than 55 percent of the growth is concentrated in the rural areas.

He added that even during the Humanitarian Operation, the government had initiated massive development projects to make the country a hub of many sectors. “Today most of them are reaching completion,” President Rajapaksa said.

The President said although the country eliminated terrorism leading to economic progress, local and international organisations which manipulated the LTTE, are still functioning and are reluctant to see the enormous development that has taken place in the North and East.

He added they were blind to the fact that more than Rs 260 billion was utilised in the North and East for infrastructure development.

He added the room for foreign intervention in the country was created through terrorism. He said those who attempt to solve our problems suffer due to numerous issues in their own countries.

President Rajapaksa said reconciliation cannot be made overnight as suggested by outsiders as hatred was spread for three decades by the terrorists.

He added the government has not ceased to make peace achieved at great sacrifice, a permanent one.

The President said: “Suggestions made by outsiders could be short term. We can reach our solutions with mutual understanding.”