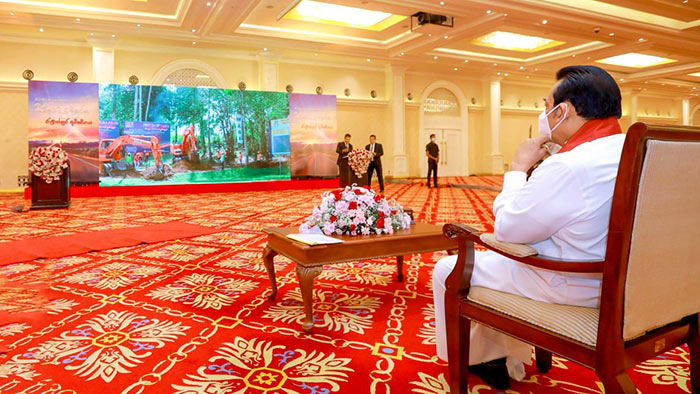 Prime Minister Mahinda Rajapaksa yesterday stated that irrespective of obstacles, challenges and difficulties, the Government will always remain committed to policies and development programmes it has put forward until they become realities.

“We started the Southern Expressway as the first Expressway in Sri Lanka in 2006 with a war in the country. Today, we are embarking on the Ruwanpura Expressway at a challenging time when not only the country but the whole world is gripped by the COVID-19 pandemic,” the Prime Minister said.

He was speaking at the inauguration of the Ruwanpura Expressway project at Temple Trees yesterday morning (07).

The Prime Minister said the Ruwanpura Expressway project, which was planned to start in 2014, was completely abandoned by the previous Government.

In the second and third phases, the Expressway will be extended to Ratnapura and Pelmadulla.

The Feasibility studies, design and construction of the Ruwanpura Expressway are being done entirely by local engineers, institutes and companies.

The construction of the Expressway is expected to reduce traffic congestion and costs, save time, facilitate access to tea, apparel, minor export crops and gem markets and supply points, expand investment opportunities including tourism and create new jobs.

“We are launching the Seventh Expressway in Sri Lanka. I remember from the early days when highways were being built, our dear people in Sabaragamuwa asked us when a highway would be built to Ratnapura”.

“We had planned to start work on the Ruwanpura Expressway in 2014. We thought that the Government which came to power in 2015 would start where we stopped the development of the country. They did not want to develop the country. Therefore, everything we had started was stopped by the previous Government,” he added.

The Prime Minister went on to say that the previous government had not stopped at that and went on to take revenge. “We were taken before Courts and Commissions,” he added.

“We took back a country where national security and economy had been affected and development had come to a standstill. But we gladly accepted the challenge. We always wanted to give the best to this country and its people. We wanted to fulfill the expectations of the people.

Therefore, no matter how many obstacles we face, we as a Government will remain committed to the policies we have put forward until they become a reality,” he added.The Government is spending Rs.54.7 billion from local funds for the first 24 Km of the expressway. A local company is in charge of the construction.

The Prime Minister said as soon as the first phase is completed, the construction of the second phase from Ingiriya to Ratnapura and the third phase from Ratnapura to Pelmadulla will be expedited.

The ceremony was conducted via new technology from Temple Trees due to COVID-19 restrictions.

2 Responses to Development programmes will continue despite obstacles, challenges – PM