‘Dilscoop’ Dilshan to hang up his boots 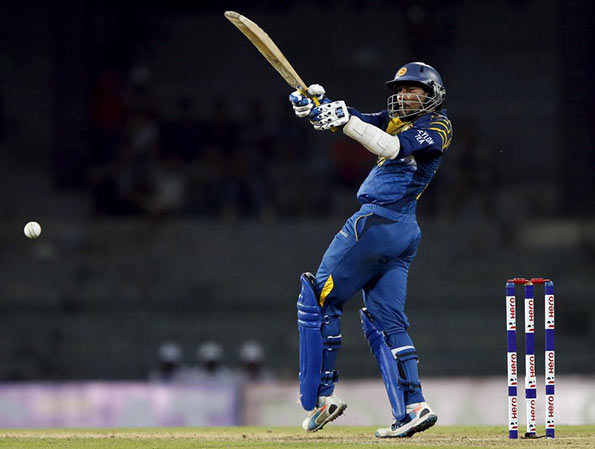 Dilshan, who made his ODI debut against Zimbabwe in 1999, played as a middle-order batsman in his early years. In 2007, he and Sanath Jayasuriya opened the innings for their country and there was no looking back for him. Dilshan is known for his innovative shots in both ODIs and T20Is. He invented a scoop, a shot played over the keeper’s head, and it was called ‘Dilscoop’. Many international stars have put this shot to effective use.

Dilshan was not in his best of form lately and was being rumoured to be pressured by the Sri Lankan selectors. His form plummetted to low levels in the recent years and with the Sri Lankan Cricket Board trying to create a team for the 2019 World Cup, he was forced to show his calibre. But at the age of 39, his form continued to spiral down. In the year 2016, he had only one half-century to his credit.

Though technically sound, Dilshan preferred defensive technique only when his team is in severe crisis. He, like Virender Sehwag, would attack the bowlers right from the word go. He is also a useful offbreak bowler and has taken crucial wickets for his team. He normally will be used to break partnerships.

Dilshan won the Twenty20 International Performance of the Year award at the 2009 ICC Awards, besides winning the man of the series trophy for his individual batting performances in the 2009 ICC World Twenty20 tournament. He was also part of the team that won the 2014 ICC World Twenty20. He made scintillating performances for the Sri Lankan side that made the finals of 2007 Cricket World Cup, 2011 World Cup, 2009 World T20 championship and 2012 World T20 championship.

Let’s have a look at some of his dashing ODI and T20 international knocks:

India v Sri Lanka at Rajkot on December 15, 2009: Sri Lanka won the toss and asked India to bat first on a placid wicket. Riding on some excellent knocks from Virender Sehwag (146), Tendulkar (69) and Dhoni (72), India scored a massive 414 for 7 wickets in 50 overs. It was a stiff challenge for Sri Lanka and spectators were already celebrating Indian victory at Rajkot. But they were in for some disappointment as Dilshan and Tharanga smashed the Indian bowlers apart and put on a 188 run partnership for the opening wicket in just 24 overs. Indians begin to breath a sigh of relief as Tharanga was out for 67. But Dilshan continued his dominance over the Indian bowlers with another legendary batsman Kumar Sangakkara. They both added 128 for the second wicket in just 12.3 overs. Dilshan continued his swashbuckling innings after the dismissal of Sangakkara. But when he got out for 160 with the Sri Lankan score on 339 in just 39.1 overs, Indians believed they can win the match. But it was a close game and India won the match by just 3 runs. Dilshan’s 160 came of just 124 balls with 20 fours and three sixes.

Though Sehwag was named the man of the match, Dilshan earned accolades from the fans and also the Indian team for his blistering innings.

India v Sri Lanka at Nagpur, December 18, 2009: India won the toss and elected to bat first. But India were in trouble at 132 for 4 in 26.3 overs. But with some rearguard action from Dhoni (107) and Raina (68), India posed a total of 301 for 7. This time around, Dilshan had other ideas. Once again he tormented the Indian bowlers with blistering shots and made a superb 123 off just 112 balls with 12 fours and 2 sixes. Sri Lanka won the match with five balls to spare. It was a memorable innings from Dilshan. He was declared man of the match.

Commonwealth Bank Series, 2nd Final, Australia v Sri Lanka at Adelaide, March 6, 2012: The first final was won by Australia by 15 runs and the team was aiming to clinch the second final. Australia won the toss and elected to bat. Riding on some hundreds from David Warner (100) and Michael Clarke (117), Australia scored 271 in 50 overs. Jayawardene and Dilshan opened the innings for Sri Lanka and started to dominate the Australian bowlers. They both added 171 runs for the opening wicket in just 27.1 overs. Jayawardene was out for 80 off just 76 balls with 8 boundaries and 1 six. But Dilshan, along with Sangakkara, was a determined man. Both added 55 for the second wicket in 11.1 overs and thwarted an Australian victory. Dilshan was out for a well-made 106 off 119 balls with 10 boundaries. This was one of his slowest innings. He was declared the man of the match. This win enabled Sri Lanka to level the best-of-three finals 1-1. Australia then won the third final and lifted the Commonwealth Bank Series.

Sri Lanka v South Africa at Pallekele, July 28, 2013: South Africa won the toss and elected to bat. Riding on Amla’s 77 and Duminy’s 97, South Africa were on the verge of putting up a huge total. But the Sri Lankan captain introduced Dilshan into the attack. He removed Amla and also took the all-important wicket of AB de Villiers. Sri Lanka restricted South Africa to 238. Dilshan completed his quota of 10 overs and took 2 for 40. Continuing his splendid bowling effort, he made a mockery of the South African bowling attack. He also scored an unbeaten 115 runs off 130 balls with 16 boundaries. He was declared the man of the match.

Sri Lanka v Australia at Pallekele, August 6, 2011: Australia won the toss and elected to bowl. Dilshan thrashed the Australian bowlers and scored a scintillating 104 off just 57 balls with 12 boundaries and 5 sixes. Sri Lanka posted a formidable 198 off just 20 overs and restricted Australia for 163 and won the match. Though Dilshan failed in the second match, Sri Lanka won the T20 International series 2-0.

New Zealand won the toss and posted a competitive 174 off 20 overs. Despite losing wickets at the other end, Dilshan scored a fine 76 off 53 balls with 5 fours and three sixes. Sri Lanka also scored 174. It won the match by one-over eliminator. In the one over eliminator, it scored 12 runs and restricted New Zealand for just 5 runs. Dilshan was named the man of the match.

Only T20I: Sri Lanka v India at Colombo (RPS), February 10, 2009: Sri Lanka won the toss and chose to bat, with Dilshan as the captain. He scored 61 off just 47 balls with 7 boundaries and 1 six. Sri Lanka scored a competitive 171. India were in trouble at 115 for 7. The Sri Lankans scented victory and vociferous fans were behind them. But the Pathan brothers had other ideas. They just thrashed the Sri Lankan bowlers and 59 runs in just 4.1 overs, and India won the match by three wickets and four balls to spare.

Can the vaccuum created by the retirement of Sangakkara, Mahela Jayawardene and Dilshan be filled by young Sri Lankan cricketers?

4 Responses to ‘Dilscoop’ Dilshan to hang up his boots

Home » ‘Dilscoop’ Dilshan to hang up his boots