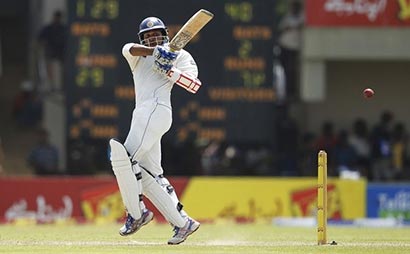 Tillakaratne Dilshan and Kumar Sangakkara played patient Test match cricket in the second session of the first day in Galle to steadily push Sri Lanka towards a position of strength against Pakistan. On a track that was giving a bit of assistance to Pakistan’s spinners, Dilshan curbed his natural attacking instincts after lunch to reach his 13th Test hundred while Sangakkara played a controlled innings against his favourite opposition as the pair put on a 124-run partnership.

On an unexpectedly sunny morning, Dilshan was his usual aggressive self early on, but knuckled down as the innings progressed. The change of tone came after Sri Lanka’s toughest stretch of the day, when Saeed Ajmal and Abdur Rehman piled on the pressure in the half hour before lunch. Dilshan survived several lbw appeals, Sangakkara edged past slip, there was a leading edge from Dilshan, the spinners put together three successive maidens, and despite a healthy scoreline of 94 for 1 Sri Lanka were relieved when the interval came.

Pakistan’s spinners kept probing away after the break, but Dilshan and Sangakkara repelled anything that was sent at them. Though the odd ball was spinning sharply, the pair watchfully defended and attacked only the loose deliveries as Sri Lanka made steady, if not eye-catching, progress. Sangakkara used the sweep effectively, and nudged the singles around, while Dilshan showed he wasn’t going to try smash everything. On several occasions, he initially attempted an adventurous stroke before deciding to defend if the ball wasn’t there to be hit. Case in point, a short ball from Junaid Khan that cramped him up and made the planned pull shot difficult, making Dilshan block the ball towards the bowler.

The score rose much quicker in the morning session. The new ball didn’t assist Pakistan too much in terms of swing though Umar Gul managed to trouble the openers once he had warmed up. Tharanga Paranavitana, recalled after missing Sri Lanka’s previous three Tests, soaked up much of the strike early on and survived when the umpire failed to pick an inside-edge through to the keeper.

His partner Dilshan was also a touch subdued early on, but soon served up his cavalier brand of batting. Mohammad Hafeez, the stand-in Pakistan captain, had done a solid job on being handed the ball early in recent Tests, but he was launched over long-on for six in his second over. By the time Junaid returned for his second spell around the drinks break, Dilshan was dishing our regular boundaries: a couple of dismissive pulls for four and nutmegging the non-striker with a punched drive for another four.

Paranavitana, fighting for the opening spot with Lahiru Thirimanne, didn’t make the best of cases. Though there were some fluent off-side strokes off the back foot, he was troubled both by Gul and Hafeez. When Saeed Ajmal came into the attack, Paranavitana survived an lbw chance but two balls later he uncharacteristically charged out to be comprehensively beaten, and stumped by Adnan Akmal.

Dilshan had sped to his half-century at a run-a-ball, but the Pakistan spinners managed to pull it back after that. Dilshan’s second fifty took 125 deliveries. Five minutes before tea, he reached his hundred and underlined Sri Lanka’s dominance. Pakistan hit back as Ajmal trapped Dilshan on the back foot but they still have a huge task ahead as they have to contend with the prolific pair of Sangakkara and Mahela Jayawardene.