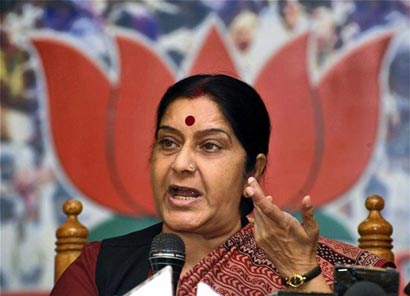 The Leader of the all-party Indian delegation was quoted having told the Indian Prime Minister Manmohan Singh that she discussed devolution of powers to the Sri Lankan provinces with President Mahinda Rajapaksa.

According to the Hindu newspaper which covered the meeting the devolution was on the lines of the 13th amendment to the Sri Lankan constitution.

The leader Ms.Swaraj also quoted having told the President that she had urged President Rajapaksa to hold talks with the Tamil National Alliance to resolve the grievances of the Tamils.

The following is the report the Hindu published:

“Leader of the Opposition in the Lok Sabha Sushma Swaraj said on Tuesday that during her recent meeting with Sri Lankan President Mahinda Rajapaksa she discussed devolution of powers to provinces, as envisaged in the 13th Amendment to the island nation’s Constitution.

“Ms. Swaraj, who led an all-party parliamentary delegation to Colombo for a first-hand assessment on the post-war situation in the country, told journalists here that she urged Mr. Rajapaksa to hold negotiations with the Tamil National Alliance (TNA) to resolve the grievances of Tamils.

“The Leader of the Opposition called on Prime Minister Manmohan Singh on Monday evening and briefed him on the 12-member delegation’s six-day visit to Sri Lanka.

“TNA wants a negotiated settlement. Its members say they are proud Sri Lankans. They are against violence and stand for an undivided Sri Lanka. So we asked the government, what is the hitch? We made a fervent appeal to both parties — the Tamils and the government — for settling the issues,” Ms. Swaraj said.

“Mr. Rajapaksa told the delegation that he could only request the TNA and not force them to be part of the Parliamentary Select Committee which had been tasked to work out an acceptable solution to all stakeholders. Ms. Swaraj discussed the demand of the Tamil-dominated northern and eastern provinces for withdrawal of the Army.

“They come to birthday parties uninvited or enter temples,” Tamils told the delegation members. She said the decision of India to vote in favour of the U.S.-sponsored resolution on Sri Lanka at the United Nations Human Rights Commission was raised by Sri Lankan leaders. Colombo was upset with New Delhi for voting on the resolution.

“Ms. Swaraj said the hosts were informed that the resolution only talked about the need for the Sri Lankan government to implement the recommendations of a commission appointed by its President.

“She said there was nothing extraordinary in the UNHRC resolution. It was pointed out that the Lessons Learnt and Reconciliation Commission (LLRC) “is their baby” and so they should go by its recommendations but “they had no answer.”