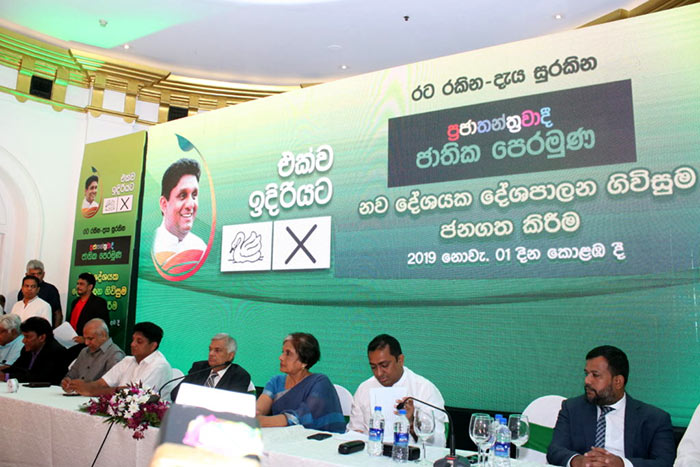 The New Democratic Front (DNF), led by the UNP and the Organisation to Protect the SLFP, led by former President Chandrika Bandaranaike Kumaratunga, joined 30 political parties and over 28 civil society organisations to form the Democratic National Front (DNF) coalition, in a bid to ensure the victory of the DNF Presidential candidate, Minister Sajith Premadasa.

Dambara Amila Thera, Saman Ratnapriya, Ravi Kumudesh, and Professor Chandraguptha Thenuwara, all of whom were among those who signed the agreement. Minister Arjuna Ranatunga and Parliamentarian Chathura Senaratne also signed it.

Addressing the gathering in Colombo, Premadasa said the aim of forming the Coalition was to create a new era of transformation in the democratic history of this country. “It would be centred only on meeting national needs. We will carry out all our activities locally and internationally for the benefit of the country,” he pledged.

He also pledged that on no account would anything be done to jeopardise or destroy the country. “The aim of forming the Coalition is also to ensure development, maintenance of social justice and unity, and the protection of the sovereignty and territorial integrity of the country.

It is also to ensure that all ethnic groups and  religions are protected while giving priority to Buddhism. All parties aim to take the country towards prosperity.” He said the coalition had been formed to ensure that the country’s economic development was distributed justly among all people.

“Our aim is to create economic development centred on knowledge, so as to give birth to intellectuals. It would empower schoolgoing children to become strong citizens,” he said. Premadasa said the Coalition also hoped to create an economy based on exports.

“The export centred economy that would be created would be through a digital and industrial revolution. Agriculture and traditional industries would be further strengthened with new technology and welfare provided by the Government.”
“We hope to fulfill a public service that will benefit the people, free from corruption and fraud.”

Minister Dr. Rajitha Senaratne said they had formed a similar coalition prior to the 2015 Presidential Election when incumbent President Maithripala Sirisena contested as the common candidate under the swan symbol. A document was signed even then at the Vihara Maha Devi Park.

“The Government that was elected into power was able to establish democracy and freedom. However, there are pledges made on that occasion which were not fulfilled. We pledged to probe the frauds and killings that had been allegedly carried out during the regime of former President Mahinda Rajapaksa and give justice to those who were affected.

We have still not been able to fully accomplish the work that we set out to do,” he lamented.

“This will be the continuation of what remains incomplete,” adding Premadasa said more parties had joined to support Premadasa including some who worked with the Rajapaksas in 2015, he observed.

Dr. Senaratne said this campaign was like a 400-metre baton race. “Last time, the baton was given to the incumbent President. This time it is being taken by Premadasa who is stronger.

There will be others to take up the challenge.” He said those running on the other track were those belonging to one family and those who were subservient to them.

Referring to the Rajapaksas, he said the remaining players on the Rajapaksa track had to stay out of the race and cheer while only family members could participate.

Prime Minister Ranil Wickremesinghe said the Government had created a culture where instead of white vans that used to come during the Rajapaksa regime, now only the Suwaseriya ambulance arrived with help.

Wickremesinghe said all those responsible for the Easter attacks and were living had been arrested. “Even those who were alleged to be closely associated with them were taken into custody. “All this was done lawfully within three months,” he said.

“The country had also received international assistance to take all those who were Members of the Islamic State into custody. However, those who are coming forward to take over the country’s security have been unable to make a single statement in this regard. The problem is why are they so silent about the matter? Is there a connection,” he queried.