Do you know what is inside the food you eat? 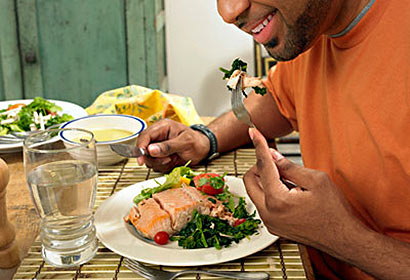 To feed 7billion people in the world is not easy. Yet, billion people remain malnourished. At least 8 million die every year of hunger-related diarrhea, pneumonia and other illnesses and a child dies of hunger every 11 seconds.

6 multinational companies dominate the agricultural input market owning the world’s seed, pesticide and biotect industries and are in cahoots – signaling dangers because the fate of food and farming lie in their hands. Monsanto, DOW, BASF, Bayer, Syngenta and DuPont thus control the global seed, pesticide and agricultural biotechnology markets giving them unprecedented power over world agriculture. They control the world’s agricultural research agenda, they dictate trade agreements and agricultural policies, they position their technologies as the “science-based” solution to increase crop yields, to feed the hungry and save the planet, they escape democratic and regulatory controls because they know how to lobby politicians and they are quick to subvert competitive markets – these are reasons enough to understand the power they yield over the food we eat. It is enough to understand how intimidated, disempowered and utterly powerless farmers are and the dangers of food security in the light of these companies and their greed to make profits poisoning the food we eat because of the consolidated control they have yielded during the last 20 years or so.

They all have agreements with each other – Monsanto and BASF, Syngenta and DuPont, Monsanto and DOW agrochemicals have produced the first ever genetically engineered maize with 8 genetic traits, Monsanto and Syngenta have come up with new litigation on global maize and soybeans with cross-licensing agreements.

What we are consuming is causing threats to our health. Physical adulteration in the form of stones in pulses, papaw in pepper, bricks in chillie powder etc can be removed CHEMICALS cant. Additionally genetic pollution and contamination of food is the new threat to food safety. Once toxic genes are put into a plant – they are in genetic code and CANNOT be turned back. That is why GMOs are NOT biosafe.

Growing consumers, greed for profit etc food safety is bypassed. Food manufacturers adulterate our food to make more money, consumers are manipulated by the cosmetic appearance given to the food they buy because they are clueless about what they are actually eating. Government agencies are supposed to inspect and stop adulteration but you cant expect much of a system running on corruption and it is the same all over the world.

However, that we are eating hazardous substances every day should cause alarm. Is it a surprise that the doctors do not know how to diagnose even a common cold and patients end up paying for hundreds of test to be told they are just having a virus!

Copper salts are used to colour pickels and canned vegetables green, dyes are injected into watermelon, peas, capsicums and brinjals, coloured chalk is used in turmeric powder are just old tricks. The industry has advanced. Now apples are sprayed with lead arsenate, turmeric and mixed spices have lead chromate which can cause anaemia, abortion and paralysis.

We can remember the melamine scandal involved in milk and infant formula because it added higher protein content but also caused renal and urinary problems. Then urea was used to make synthetic milk. Synthetic milk is produced by mixing urea, caustic soda, cheap cooking oil, detergents, water and a bit of natural milk – synthetic milk drunk over time causes loss of sight and hearing and even cancer.

The dairy industry uses oxytocin hormone on animals to increase milk production but ends up destroying the cow’s reproductive system since the cow goes dry in 3 years and is then abandoned or slaughtered. Those who drink milk from the oxytocin-injected cows are also at risk. Because of hormones in food, minor girls attain early puberty. Oxytocin is also used in growing vegetables – when injected to pumpkins it doubles the size.

Pesticides are becoming a major threat not only to the farmers but to consumers too and people do not seem concerned that they are paying to eat poisons.

Food manufacturers take pains to make us believe that their products are healthy for us. Labels often deceive consumers in various ways:

· Hiding Sugars (sucrose, high-fructose corny syrup, dextrose etc) never appear in the first 3 ingredients in the labels. These are all different forms of sugar and consumers are purposely misinformed.

· Great-sounding ingredients – ex in personal care products and shampoos where the word “herbal” is used with no detectable component of real herbs in them. In the food sector, companies use all types of superfood ingredients again without us knowing what the real components are. These are called “label padding” and is mostly used by junk food manufacturers who want to promote their food as “healthy foods” – consumers must know junk foods are not healthy.

· Did you know that CARMINE (a food coloring) is actually made from the smashed bodies of red cochineal beetles? (Nobody would eat strawberry yoghurt if instead of CARMINE label stated “insect-based red food coloring” – that is why CARMINE is used.

· Did you know that YEAST EXTRACT – is a trick used to hide MONOSODIUM GLUTAMATE (MSG – a chemical taste enhancer used in processed foods) since people now look for NO MSG labels?

Do not be fooled by the name of the product – “Guacamole Dip” does not contain avocados – they are made of hydrogenated soybean oil and artificial green coloring chemicals. Do cheese crackers actually contain cheese? Have we not heard of papaw seeds used in pepper, bricks used in powdered red chillies….?

The ingredient lists on the food you buy DO NOT include the chemical contaminants, heavy metals, plastic, bisphenol-A, PCBs, perchlorate and other toxics. Only what the manufacturers or food producers want you to believe is listed in the food.

Initially food companies did not want to list any ingredients saying “proprietary knowledge” and listing would destroy their business by disclosing their secret recipes. But when they did go on to list the ingredients they made sure consumers remained ignorant of what was really inside their products. How many consumers would actually get the foods they buy tested and file a case against these companies for fooling the consumer and jeopardizing their health?

Food companies are manipulating the serving size of foods to avoid featuring harmful ingredients like transfatty acids because of a ridiculous “permitted” amount allowed (0.5gram). If one cookie only contains 0.5g of transfats, 30 such cookies will have 15g and if one person consumes all – see the damage?

These additives are now causing a lot of health issues to people.

The top 15 chemical additives are:

1. METHYLCYCLOPROPENE (SmartFresh) – a gas pumped into crates of apples to stop them from producing ethylene, the natural hormone that ripens fruit. This chemical can preserve apples for a year and bananas upto a month.  Sulphur dioxide is sprayed on grapes. Food authorities allow 10 colors in foods – 4 are restricted to specific uses.

2. ARTIFICIAL FLAVORING – are imitation flavoring. Vanila flavoring is from petroleum or paper-mill waste. Stay away from artificially-colored foods like candy, maraschino cherries, and gelatin. Mice and rats exposed to blue 1 and 2, red 3 and yellow 6 suffered from brain, adrenal gland, thyroid, and kidney tumors.

3. ASPARTAME – is a sugar substitute sold commercially as Equal and NutraSweet claimed to be for dieters. It contains amino acids. Diet Soda and artificial sweeteners – exposed to aspartame, a neurotoxic chemical additive which can lead to nerve cell damage, dizziness, headaches.

4. ASTAXANTHIN – almost 90% of salmon sold in supermarkets come from farmed salmon that contains natural astaxanthin that causes pink flesh in wild salmon. Astaxanthin is made from coal tar.

7. CANTHAXANTHIN – egg yolks are not always golden yellow so producers use this pigment to make them more palatable. It may cause retinal damage.

13. POTASSIUM BROMATE – increases volume in white flour, breads and rolls. It causes cancer in animals and small amounts in breads can create risk for humans.

14. SODIUM NITRATE/NITRATE – used to preserve meat. When it converts to nitrite and combined with secondary-amines form nitrosamines – a powerful cancer-exacerbating chemical. The chemical reaction occurs in frying process. Processed foods (bacon, hot dogs, sausages etc) have SODIUM NITRATE which gives the red hue that forms nitrosamines in the system and causes cancer.

15. BISPHENOL A – canned foods can cause diabetes and heart disease. Meat and Diary Products – can contain polybrominated diphenyl ethers, polychlorinated biphenyl and dioxins which are present in the soil. Never microwave food in plastic bowls, containers, or dishes. Exposure to heat causes the bisphenol-A found in plastics to break down and potentially contaminate your food. Also, make sure to hand wash them.

Some tips for reading ingredients on labels

· Ingredients are listed in order of their proportion in the product – so the first 3 top ingredients matter most.

· If ingredient list contains long, chemical-sounding words – avoid them because they are likely to contain toxic chemicals.

· Don’t’ be fooled by fancy-sounding herbs.

· Ingredient lists DO NOT have lists of chemical contaminants which include pesticides, solvents, acrylamides, PFOA, perchlorate (rocket fuel) – try to buy organic, minimally processed foods at least try to grow among friends and family and share what is grown at home.

· Don’t be fooled by word “wheat” in flour – all “wheat flour” even processed are bleached and stripped of it nutrition. Only “whole grain wheat flour” is a healthful form of wheat flour. Wheat Flour products are not whole grain products.

· Brown products are not healthier than white products – brown sugar is a gimmick. White sugar is added brown coloring and flavoring. Brown eggs are no different to white eggs. Brown bread to be healthier than white bread must have whole grains – if not both are the same. These are tricks used to make consumers pay more for manufactured foods.

What the people of the world need to do is to first realize that every plant must be protected. Trees and the ecosystem are very important and we must not compromise our environment and ecosystem for development. Development must take place without usurping the natural habitat or unearthing plantlife that existed.

People need to wake up from their slumber. Food is being poisoned for profit and we are victims of an industry that is using all sorts of methods to add chemicals to increase production, longer shelf life and provide the attractive appearance to make us buy the food.

Use every power available to lobby against GMOS (genetically modified foods) – they may say it’s a cheaper option but the damage caused is irreversible to both humans and the ecosystem.

As far as possible try to buy organic foods, inform farmers and educate them, try to stay away from pesticides and other varieties of chemicals, get together with friends and grow some vegetable however small your land area is -share these naturally grown food – educate and involve children because they must also be aware of the tragedy that is befalling the environment because of man’s greed.

1 Response to Do you know what is inside the food you eat?

Home » Do you know what is inside the food you eat?