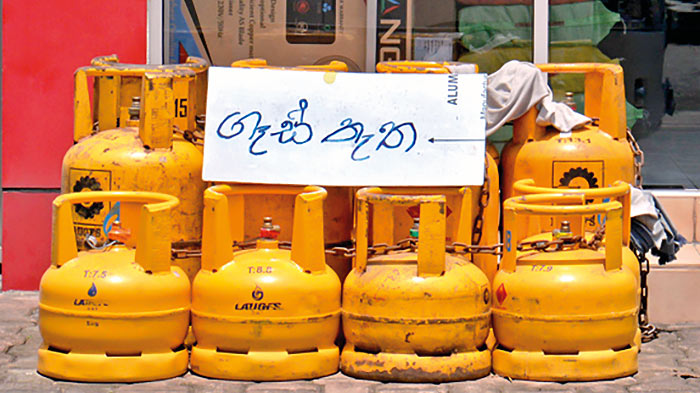 A shortage of US dollars has hit LPG (liquid petroleum gas) and milk powder importers, who are finding it difficult to honour payments to suppliers.

Laugfs Gas Plc said it has fallen behind in payments and cannot distribute enough LPG gas to meet domestic demand.

CEO W.H.K. Wegapitiya said although container loads of gas are available at the Hambantota Port and in the company’s storage and filling facility in Mabima the company was unable to open letters of credit to pay suppliers. The company had unsuccessfully approached both state and private banks.

To release the consignment the company needs to open $US10 million worth of letters of credit but local banks were unable to supply dollars at the volume needed and were releasing the currency only in meagre amounts of $US500,000 every two to three weeks.

With gas shortages building, people across the country are seen queuing up at Laugfs gas outlets in the scorching sun, carrying the company’s yellow cylinders for refills.

Demand has not been deterred by the government’s green light for an increase in the price of Laugfs gas. A price increase of Rs. 363 on a 12.5kg bottle of gas was approved last month.

Mr. Wegapitiya said the shortage has been caused because the company had suspended distribution during the period it was demanding a price hike.

A reduced workforce at its plants, due to COVD infection, was exacerbating the problem.

“Every day another worker turns out to be positive and we are left with fewer workers,” he said

Despite this, the company is releasing around 200 to 300 metric tonnes daily. “This is the amount we used to deliver before the increase in price,” Mr. Wegapitiya said.

The Milk Powder Importers Association said its members, too, are faced with the problem of acquiring US dollars to import supplies.

“The dollar currently is Rs. 228 but the companies are demanding Rs.10 more,” he said.

The companies had previously pressed for a price increase of Rs. 945. “This was in January when the dollar stood at Rs. 210 to the rupee,” Mr Weerasooriya said.