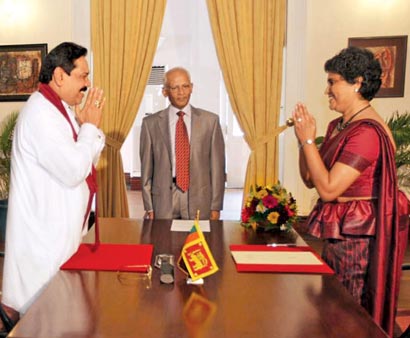 She is a member of the Judicial Services Commission and deputy chairperson of the Sri Lanka Mahabodhi Society.

Dr Bandaranayake as the most senior judge of the Supreme Court has written a number of judgements of great significance. She has delivered several dissenting judgements which received plaudits from the public and the legal fraternity.

Dr Bandaranayake obtained her Degree of Bachelor of Laws with second class honours in the upper division becoming first in the order of merit in 1980 from the Faculty of Law, University of Colombo.

She has served as the acting Chief Justice 11 times.

The new Chief Justice was awarded the Degree of Master of Philosophy from the University of Colombo in 1983 and the same year she was enrolled as an Attorney-at-Law of the Supreme Court of Sri Lanka.

In 1986, she obtained the Degree of Doctor of Philosophy from the University of London, becoming the first woman in Sri Lanka to obtain a PhD in Law from a foreign university. Dr. Bandaranayake is a recipient of several scholarships and awards. She was awarded the Commonwealth Open Scholarship in 1983, the Chevening Scholarship in 1989, Fulbright-Hays Fellowship in 1996 and the British Council Assert Award in 1993 and 1994.

Dr Bandaranayake has written several articles and monographs and has presented several papers in the field of public law.

Dr Bandaranayake commenced her career as a visiting lecturer attached to the Faculty of Law, University of Colombo in 1981 and after holding the positions of assistant lecturer and senior lecturer, became the Head of the Department of Law in 1987.

Dr Bandaranayake has also held the position of acting Vice Chancellor of the University of Colombo on several occasions. She became an Associate Professor of Law on merit in 1993.

Dr Bandaranayake has served as a member of several committees of the University of Colombo and other universities and has also functioned as a member of the Human Rights Task Force, the Council of Legal Education and the Law Commission of Sri Lanka.