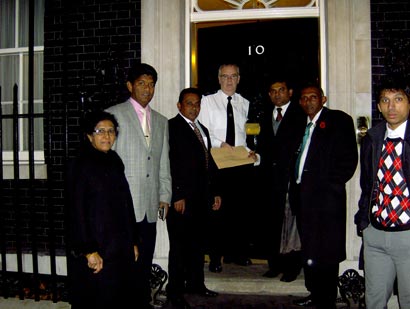 Members of the British Sri Lankan Forum (BSLF)-UK visited No: 10, Dawning Street, the official residence of British Prime Minister David Cameron recently. They were allowed to go through the famous door, giving a very unusual time slot to hand over a petition which contains many issues related to the relationship between both countries and some current political matters were raised where Sri Lanka is facing in the West. The petition further included in detail report explaining the successful rehabilitation, reconstruction and reconciliation process carrying out by the Government of Sri Lanka with lots of difficulties.
Members from other patriotic organizations including representatives from Sri Lankan Muslim Information Centre-UK were also participated.