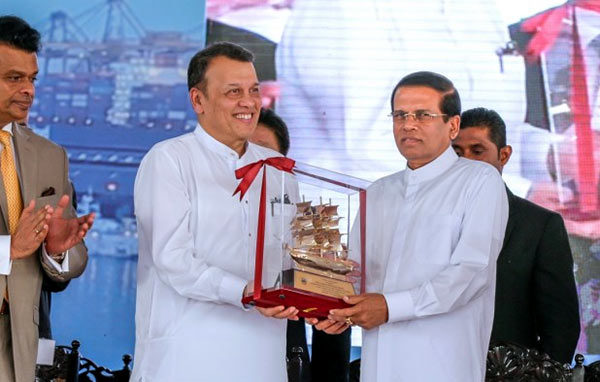 President Maithripala Sirisena emphasizes that the Eastern Terminal of the Colombo Port will not be handed over to any external party under any circumstance.

“It was in September 2014 when the agreement on the Hambantota Port was signed with the Chinese company, it was taken up for discussions and the cabinet approval was also received. It was during the period of former government. The clauses and conditions of that agreement were very critical. What the current government did was to amend those in a way which is better for the country. Those amendments included reduction of the  land area to 50%, ensure its operation under the laws and regulations of the government of Sri Lanka and ensure not to let any country or any foreign company the ownership of even an inch of the land of Sri Lanka. The land will be given only on a lease”, the President explained.

He pointed out that the former government had sold out given six acres in front of the Galle Face Green to the Shangri-La Company. No previous government had done such a thing. “They also had planned to give 240 acres for Port City on free hold. We managed to change the Port City deal into a lease system but couldn’t take any action against the deal with Shangri-la as they had already signed the relevant agreement”, the President pointed out.

“Though whatever criticisms are done, I always emphasize that I will not hand over even an inch of Sri Lankan land to another country or any foreign company”, he said.

He emphasized that the government will create room for people to live in a prosperous country by winning over the economic challenges faced by the country.

“Though some people want to come to power very soon, there is no way to form a new government before an election to be held after 3 years from now”, he stated.

The President presented awards to the workers who completed 38 years of service at Sri Lanka Ports Authority.

Sri Lanka Freedom Trade Union presented a souvenir to the President at this occasion.