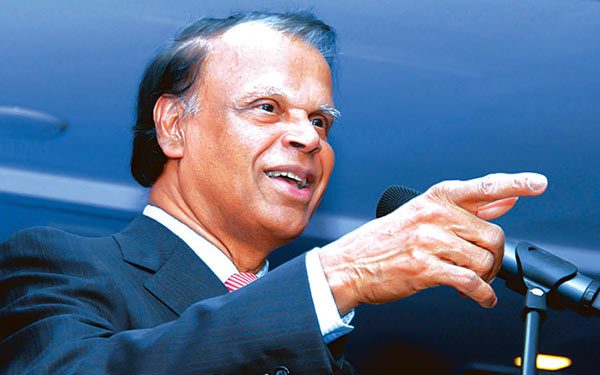 Richard Pieris & Company PLC plans to invest between Rs 15 to 20 billion in several unique projects in the next three years that will see electric cars, lithium batteries and Oud perfume manufactured in Sri Lanka.

Dr. Sena Yaddehige, Chairman of Richard Pieris & Company PLC, said the group profit that stood at Rs 180 million in 2002, today, before even finishing the year has increased to Rs 4,100 million, a 28 times increase. He further said the business that commenced manufacturing rubber erasers has developed to such a extent that there was not a single house that had no Arpico product in Sri Lanka today.

Dr. Yaddehige owns 10 patents has over 20 million cars all over the world running with his chips.

The Chairman said he would embark on enormous important projects and one of them is building a lithium battery factory. This was required to complement his other major project which is to build electric cars in Sri Lanka.

“For this, an 80 acre plot of land has already been purchased for Rs 730 million,” he said addressing a gathering in Colombo on Wednesday. Dr Yaddehige said he plans to introduce the four-door electric car for a very competitive price of Rs 1.5 million.

He said his next project is to manufacture the world’s most expensive Oud perfume in Sri Lanka which is made from the resin of the wallapatta tree. He said they would convert 68% of their plantation to grow wallapatta. The wood of a 9 to 10 year wallapatta tree has a value of Rs 225,000. If 400,000 such trees are grown, the value of those trees would be in excess of Rs 100 billion in 8 to 10 years time, he said. “But the trick is we have to inoculate a certain fungus into it and we are working on it.

Richard Pieris & Company has another project involving tea, to extract its flavour and essence and market it as green tea. “Last year it was launched in Las Vegas,” he said. An extract of the plant will be set up in Maskeliya for this purpose.

Dr Yaddehige said they have also decided to replace the soil of their plantations and a team of five top scientists of the country was on the job. He said they plan to take 180 tons of special kind of enriched and enhanced compost every three months to the plantations to enhance the quality of soil in the plantations.

The asset base of their finance company has grown to Rs 11 billion with Rs 4 billion in deposits within five years. The Group’s plantation sector is expected to record a Rs 1.5 billion turnover.

He said they own the fastest growing life insurance company with a hundred percent growth. The Group employs 32,000 and in addition provides indirect employment to a further 200,000.