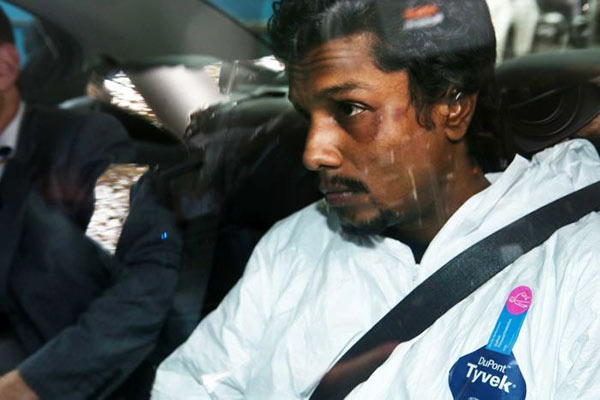 A Sri Lankan man who threatened to set off a bomb onboard a flight from Melbourne is facing a maximum 20 years’ jail after pleading guilty to attempting to take control of an aircraft.

Manodh Marks, 25, forced Malaysia Airlines flight MH128 to Kuala Lumpur to turn back shortly after take-off when he tried to enter the cockpit while screaming that he had a bomb.

The catering student was overpowered by passengers who tied him up with belts until the flight landed at Melbourne Airport in June.

Police were criticised for taking up to 90 minutes to board the plane and remove Mr Marks, who had in fact been holding what officers described as a “speaker-type” object.

He was initially charged with multiple offences, some of which carried a maximum penalty of life imprisonment.

But prosecutors dropped a number of charges, leaving Mr Marks to plead guilty in the Melbourne Magistrates’ Court to a single charge of attempting to take control of an aircraft.

It carries a maximum penalty of 20 years’ jail.

The court was told Mr Marks, who had been living at Dandenong in Melbourne’s south-east, has a psychiatric illness.

He has been remanded in custody to face a plea hearing at the County Court in April.