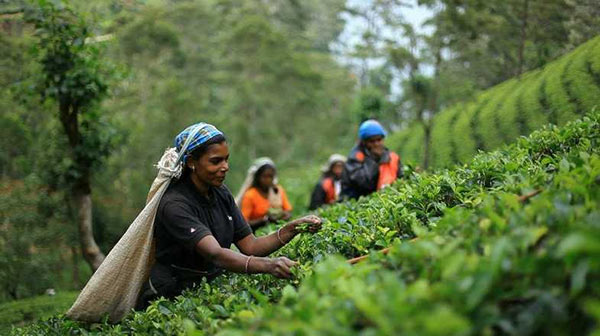 Plantations in Sri Lanka that supply tea stamped slavery-free to top global companies are under investigation by ethical label groups after an expose found illegal wage deductions that have left some workers ill and unable to afford healthcare.

An investigation by the Thomson Reuters Foundation found some workers at tea estates certified by Rainforest Alliance and Fairtrade taking home as little as 26 Sri Lankan rupees (14 U.S. cents) a day after fees and deductions levied without consent.

Wage slips from 17 workers at nine Rainforest-certified tea estates – six of which were also backed by Fairtrade – showed daily earnings widely being cut by more than three-quarters for debt repayments, salary advances and a laundry list of fees.

Laborers in Nuwara Eliya – a district in Sri Lanka’s central highlands – said their wages were also halved if they failed to meet a daily picking quota or arrived to work late.

Sri Lanka’s labor ministry declined to comment on the findings despite repeated requests over a two-week period.

The Minister of Plantation Industries, Navin Dissanayake, said he “disagreed” that workers’ wages were being halved.

Rainforest Alliance and Fairtrade both said they were investigating the findings as deducting wages without workers’ consent was not allowed by law and contravened their standards.

“The allegations you have reported to us … if confirmed, represent serious violations of the Fairtrade Standards,” said a Fairtrade spokeswoman, adding that the group’s independent certifier, FLOCERT, would follow up on the findings.

A spokeswoman for Rainforest Alliance said it was investigating the findings, and the estates in question could “have their certification status suspended or canceled”.

Consumer goods giant Unilever – which owns a dozen well-known tea brands from PG Tips to Lipton – said it was “deeply concerned” and would investigate.

Major tea company Tetley – which is owned by India’s Tata Global Beverages – said it was in touch with the Rainforest Alliance regarding the findings.

The expose raises questions about the effectiveness of ethical label schemes – which are used by major tea brands and can mean higher prices – and their ability to detect and combat labor abuses of workers at the bottom of global supply chains.

“They are treated as inferior and face discrimination,” said Eliyathamby, who heads Thambiah Law Associates, a private firm, and is general secretary of the People’s Workers’ Union.

Dissanayake, who was appointed minister of plantations in 2015, said he was unaware of earnings being cut over quotas.

“(However) I concede that estate workers are one of the most impoverished communities with the highest rate of malnourishment,” he said. “The situation has improved over the past 20 to 30 years, but that doesn’t mean we should be happy.”

Sri Lanka is the world’s third biggest tea exporter behind China and India, earning $1.4 billion last year, and about 4 percent of a 21 million population live and work in tea estates.

Sumathi, 25, a tea picker who works on a Rainforest Alliance and Fairtrade-certified estate, said her daughter was born with a heart condition and needed frequent medical care.
The deductions on her monthly payslip – taken without her consent – amounted to $35, enough for 10 trips to hospital.

“Why would I let them take my money when I don’t even have enough to bring my baby to the doctor?” she said.

Tharshini, 51, who also works on an estate backed by the two certifiers, said she was suffering from malnutrition and anemia.

Her most recent monthly payslip showed she took home $4.50 after the estate deducted 87 percent of her earnings for debt repayment and various fees to pay toward an estate funeral fund, a co-op fund, tea and the salary slip itself.

“I’m sick a lot because I don’t have enough money to buy food or medicine,” she said.

Tharshini said if she picked less than 18 kg of tea, the estate paid her for a half-day, regardless of how many hours she worked, adding that she rarely met the quota due to exhaustion.

The same quota policy was in effect at several other tea estates, according to both estate managers and workers. Wages were also halved if workers arrived late by just 15 minutes.

According to the payslips gathered by the Thomson Reuters Foundation, workers at Fairtrade-certified estates were subject to 74 percent wage deductions on average, while those at Rainforest Alliance-backed estates saw 65 percent taken away.

Several of the payslips showed deductions of over 75 percent – and slashing wages by more than three-quarters is illegal under the Wages Board Ordinance and the Allowances to Plantation Workers Act, said Dissanayake, the former government lawyer.

The 17 wage slips showed laborers taking home an average of $1.54 daily after debt repayments, salary advances, and fees. In reality, some workers earned less as wages being halved for not meeting quotas or arriving late does not appear on the payslips.

Several laborers also complained that their estates only abided by the certifiers’ ethical standards during audits but they were afraid of reprisals if they revealed this to auditors.

“Normally we don’t wear the protective gear when we spray chemicals, but on the day that Fairtrade comes, the manager tells us we have to,” one worker said on condition of anonymity.

Four tea estate managers defended their working conditions, with one saying his plantation did not do anything to prepare for audits because “we implement the standards perfectly”.

“I’m under pressure from the workers on one side and from the management on the other side to maximize profits,” said one of the estate managers, declining to be identified.

BOTTOM OF THE CHAIN

Major tea companies have increasingly relied on certification schemes to assure consumers over ethical produce.
Some firms are now setting their own standards but leading brands, including Tetley and Twinings, still say they source all or most of their tea via Rainforest Alliance and Fairtrade.

Tetley said it was in contact with Rainforest Alliance but had not sourced tea from the certified estates visited by the Thomson Reuters Foundation in the past year, although seven of them feature on Tetley’s supplier list that is available online.

Twinings’ Head of Social Impact, Céline Gilart, said the firm was fully committed to ethical sourcing, but that it has “limited leverage” because it does not own the tea estates.

The Thomson Reuters Foundation’s investigation echoed a 2018 report by Britain’s Sheffield University, which found little difference in the conditions of 600 tea workers on certified and non-certified farms in Assam and Kerala, in India.

Genevieve LeBaron, a politics professor who led the two-year research, said major tea companies must shoulder some of the blame for labor exploitation on plantations.

“There just simply isn’t enough money going to the bottom end of the supply chain,” she said.

“Companies could most certainly address that if … they paid enough for tea to ensure that workers had a living wage.”