Executive presidency to be abolished in April – Govt. Spokesman 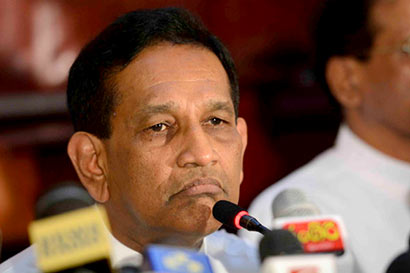 The government says that it would abolish the Executive Presidency by April if all political parties extended their support unconditionally.

Cabinet Spokesman and Health Minister Rajitha Senaratne told “The Island” that the Maithripala Sirisena administration would submit its constitutional reforms draft to Parliament on March 1 and intended abolishing the Executive Presidency by April.

Asked, about conflicting signals emanating from the government, Senaratne said that they were committed to the 100-day agenda that had been set,but it should not be forgotten that far reaching constitutional changes aimed at restoring good governance and the rule of law, required the unconditional support of the Opposition.

“A 100- day time frame was laid down because we wanted to apply pressure on ourselves.There could be some delays but the people would not complain if our main pledges were implemented”, he noted.

The Minister said that their constitutional reforms draft would contain proposals to introduce a mixture of the First Past the Post and PR System of voting , re-introduction of all the Independent Commissions which were abolished by the 18th Amendment, A Right to Information Act and making the Chief Executive answerable to Courts and Parliament.

On the question of abolishing the Executive Presidency,he observed that they had had set an April time frame.

Asked if the next Parliamentary Polls would be held in June as earlier stated or in two years time which was the due date he replied “No it won’t take so long, the maximum would be in an years time.The priority is to ensure that the required electoral changes are in place ,otherwise Elections held under the old system would result in the re-entry of narcotic dealers,rapists, and those who had swindled the country of billions of rupees to the legislature.”

1 Response to Executive presidency to be abolished in April – Govt. Spokesman

Home » Executive presidency to be abolished in April – Govt. Spokesman