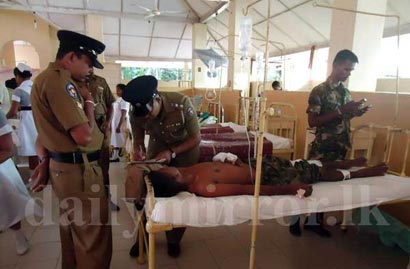 An explosion took place in the ammunition dump of the Weerawila Army camp situated near the Weerawila Air Force Base last evening injuring a soldier.

“It was an accidental explosion as we do not handle that much of ammunition and explosives. We admitted the soldier who suffered minor injuries to the nearby Weerawila Hospital,” Military Spokesman Brigadier Nihal Hapuarachchi said.

Meanwhile the Air Force said they had sent their standby emergency reaction team to the scene from the Weerawila Air Force Camp.

The incident took place around 4.00 pm in the ammunition dump maintained by the Gajaba Regiment. The explosion was followed by a number of small explosions of low magnitude.

The 14th Gemunu Watch camp has two ammunition dumps. One is maintained by the Gajaba Regiment and the other by the 122nd brigade.

The Weerawila camp where the explosion took place had comprised about 100 soldiers as it was a relatively small camp.