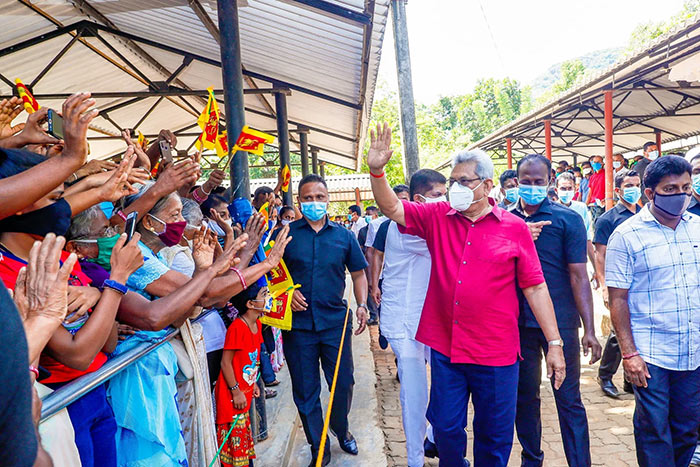 President Gotabaya Rajapaksa called upon the farming community to increase the supply of finished agricultural products for export, so that they can earn higher profits.

The re-export of pepper has been completely stopped. Therefore, the President advised the farmers to export the pepper in the form of seeds, powder or any other finished product. President Rajapaksa further pointed out that more foreign exchange earnings could be made by adopting the value added methodology.

The President made these remarks joining public gatherings at Hasalaka, today (12) organized in support of the candidates of Sri Lanka Podujana Peramuna (SLPP) contesting the upcoming Parliamentary election.

The public gatherings held at Ududumbara Hasalaka Nawarathna Ground and Hasalaka weekly fair grounds were organized by the former State Minister Lohan Ratwatte. The President instructed the farmers not to fall prey to middlemen, and to take steps to sell their paddy harvest at government controlled prices.

President Rajapaksa told the villagers that the government has already taken necessary measures to provide solutions for the issue of human- elephant conflict.

The President also paid his attention to the lack of safe drinking water which affects the people living in Minipe.

The public also apprised the President regarding the issues relating to the teacher shortage in schools and the inconvenience faced by children due to the non-availability of a school in Hasalaka area with educational facilities up to G.C.E Advance Level Examination.

The former Governor Sarath Ekanayake was also present on this occasion.