FCID will be de-politicised – Gammanpila 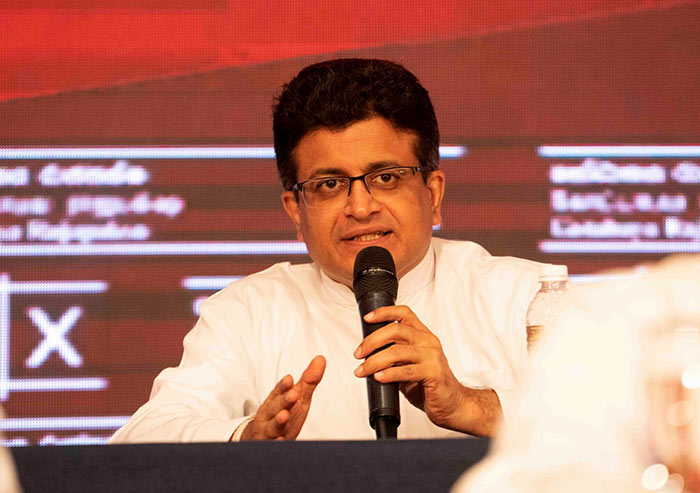 Addressing the media yesterday at the SLPP office in Battaramulla, Weerawansa charged that during the past four and half years period Prime Minister Ranil Wickremesinghe’s government failed to prove the baseless financial crimes and corruption allegations levelled against politicians and officials of the previous regime. He alleged that the government headed by Prime Minister Ranil Wickremesinghe is guilty of misusing the law for its own objectives. “So we are hoping to take necessary legal action against the culprits under our government which is scheduled to be formed soon,” he said.

The MP further said that the corruption charges have been made against Ministers Sajith Premadasa, Rajitha Senaratne and AkilaViraj Kariyawasam by the commission appointed by former President Maithripala Sirisena for misusing public funds and property. So the decision has already been taken to investigate these cases and take legal action accordingly.

“Measures will also be taken to conduct an in-depth investigation on the statement made by the white van driver introduced by Minister Rajitha Senaratne,” he added.

MP Dinesh Gunawardane said that law and order will be implemented and noted that certain issues had not been brought up for inquiry.

“We are not interfering with the justice at any cost at any time. Law will prevail and law will take its own course. We will just monitor it to ensure that all culprits will be taken before that law.” MP Udaya Gammanpila said.

Responding to a question by a journalist who inquired whether they are going to abolish the Financial Crimes and Investigation Division (FCID) or not, Gammanpila said that the FCID is not bad. But the intention of the present government and the procedure was bad.

“So we are against that. We will ensure that people would be able to directly lodge their complaints against whatever financial fraud. FCID is something essential just like Narcotics Bureau, Women and Child Bureau because there should be specialised police officers with a sound knowledge of finance to understand the financial crimes. If investigations officers are not competent enough to understand the crime how can they ensure justice. Political interference in FCID should be removed, he said.

1 Response to FCID will be de-politicised – Gammanpila

Home » FCID will be de-politicised – Gammanpila