Ferguson protests flare into violence after no indictment in Brown death 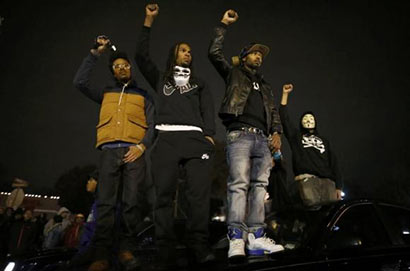 US – Ferguson: Gunshots were heard and bottles were thrown as anger rippled through a crowd outside the Ferguson Police Department in suburban St. Louis after authorities on Monday announced that a grand jury voted not to indict a white officer in the August shooting death of an unarmed black teen.

Whistles pierced the air as some of the hundreds of protesters tried to keep the peace, shouting, “Don’t run, don’t run.”

Police who formed a wall of clear riot shields outside the precinct were pelted with bottles and cans as the crowd surged up and down the street immediately after authorities said the grand jury voted to not indict Officer Darren Wilson in the shooting death of 18-year-old Michael Brown.

“Murderers, you’re nothing but murderers,” the crowd shouted. One woman, speaking through a megaphone said, “Stinking murderers.”

Not far from the stretch of Ferguson that saw the worst of the rioting after Brown’s fatal shooting in August, dozens of police and military vehicles were poised for possible mass arrests.

“They need to feel the pain these mothers feel at the (expletive) cemetery,” shouted Paulette Wilkes, 40, a teacher’s assistant who was in the crowd at the police department.

A smaller, calmer crowd of about three dozen protesters gathered outside the courthouse where the grand jury had met, including one white woman holding a sign reading, “Black Lives Matter.” Many of the protesters looked stunned.

“That’s just how the justice system works – the rich are up there and the poor are down here,” said Antonio Burns, 25, who is black and lives in the Ferguson area. The police “think they can get away with it.”

A handful of Amnesty International volunteers in bright vests tried to maintain the peace. Brown’s family immediately urged a non-violent response to the grand jury’s decision.

“I do not want people in this community to think they have to barricade their doors and take up arms,” St. Louis County Executive Director Charlie Dooley said ahead of the announcement of the decision.

Elsewhere in the United States, protesters gathered in mostly peaceful demonstrations. In New York, protesters massed in the streets of Times Square, shouting and pounding drums.

In Chicago, dozens of protesters gathered outside police headquarters, sang protest songs, called out the names of black people killed by the Chicago police, read statements and poems and chanted, “Hey, ho, these killer cops have got to go.”