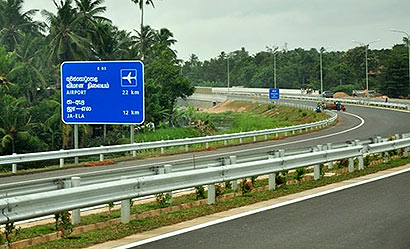 The first traffic accident on the newly opened Colombo-Katunayake Expressway (CKE) occurred today when a car traveling from Negombo to Colombo lost control and collided with the railing in both sides of the road.

Police said the driver and a female passenger who were onboard the vehicle at the time of the accident managed to escape without injuries.

The car had slammed into the left side railing on the road, near the 19.6km post, before being propelled forward and hitting the right side railing as well.

Both the car and the railing were damaged in the accident.