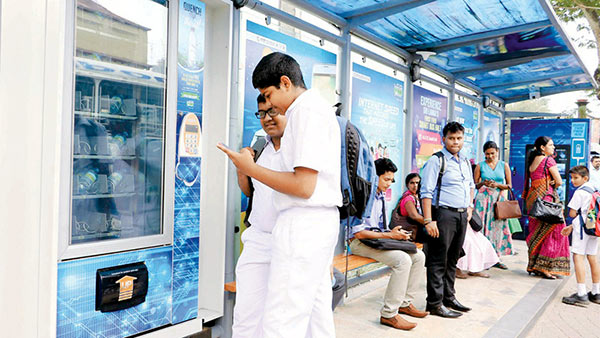 The national mobile service provider Mobitel launched a state-of-the-art Smart Bus Halt at Town Hall, Colombo as a step toward transforming Colombo into a Smart City.

The Smart Bus Halt is equipped with 4G LTE and Wi-Fi as well as a Smart Vending Machine to dispense beverages with a touch of the mobile for cashless payments. For a limited time, the machine will also provide a free chilled bottle of water via SMS, Sri Lanka Telecom said in a release.

The interactive touch screen at the Smart Bus Halt with its integrated facial analytics has the ability to customize onscreen content to suit the audience based on a multitude of characteristics such as age and gender. It also doubles as a self-service information portal with information on bus routes, train routes, timetables and localised details of ATMs among others, the release stated.

Mobitel’s Smart Bus Halt, in-line with its IoT (Internet of Things) initiative, is equipped with state-of-the-art environment sensors which monitor temperature, humidity, noise level and toxic gas concentrations. The data gathered from the sensors will enable the monitoring of air quality on a routine basis. The Smart Bus Halt will also be equipped with a mobile phone charging station, the release added.