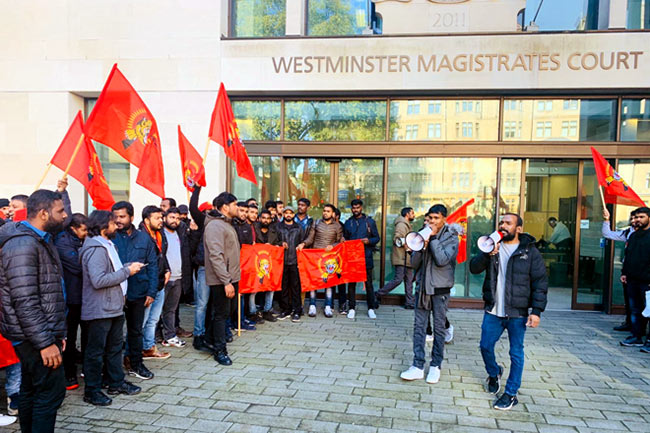 Sri Lanka yesterday slammed the brandishing of flags of a banned terrorist organisation in front of a British court in the case against Brigadier Priyanka Fernando, former Defence Attache at the High Commission in London.

The Ministry of Foreign Relations also referred to many factors that it said made it abundantly clear that legal case targeting Brigadier Fernando “is a politically motivated action”.

“The sequence of events–the private prosecution, failure to uphold Brigadier Fernando’s diplomatic immunities, the timing of the delivering of the judgement on the eve of the UK elections, the alleged unruly and intimidatory behaviour of the supporters of the prosecution during Court hearings who were also carrying LTTE flags during these hearings, the alleged leaking of privileged information submitted in Court by the defence to the public domain by the private prosecution– makes abundantly clear that this is a politically motivated action,” the Ministry said in a statement.

Tamil Tiger supporters openly waved flags of the Liberation Tigers of Tamil Eelam (LTTE), which is proscribed in Britain. This happened outside the Westminster Magistrate’s Court where a Chief Magistrate on Friday convicted Sri Lanka’s former Defence Attache to its High Commission in London of public order offences.

Chief Magistrate Emma Arbuthnot gave her judgment in the retrial in Majuran Sathananthan Vs Brig Andige Priyanka Indunil Fernando this week. He was filmed and photographed on February 4 last year making a throat-slitting gesture to pro-LTTE demonstrators outside the Sri Lankan High Commission in London. The Magistrate on Friday found him guilty of violating Britain’s Public Order Act and fined him more than GBP 4,000.

The Ministry of Foreign Relations said that, during proceedings,

the Court conceded that the summons procedure was not conducted in the ideal manner and this gave rise to re-trial.

“According to available evidence, demonstrators who had staged the protest in front of the Sri Lanka High Commission as well as those who protested in front of Westminster Magistrates’ Court during the Court hearings had used flags of the LTTE which is a proscribed organisation in the UK,” the ministry statement said.

The London-based International Centre for Prevention and Prosecution of Genocide funded the private prosecution that was brought against Brig Fernando after the throat-slitting gesture. It accused him of using threatening, abusive or insulting words or behaviour or displaying a sign of other visible representation which was threatening, abusive or insulting, thereby causing Mr Sathananthan, Palliyaguruge Vinod Priyantha Perera and Gokulakrishnan Narayanasamy harassment, alarm or distress contrary to the Public Order Act.

Brigadier Fernando was first tried in absentia and, on January 21 this year, was convicted of causing “harassment, alarm and distress” to three complainants who brought a private prosecution. But Magistrate Arbuthnot reopened the case. And an arrest warrant issued on the Brigadier was revoked in order for the court to consider the status of diplomatic immunity.

In March, Ms Arbuthnot held that the defence of residual diplomatic immunity did not apply to the throat-slitting gesture made by the Brigadier but withdrew an arrest warrant issued against him. And, this week, she said she has no doubt that the Brigadier “intended to cause, at the least, alarm” through his gestures.

Ms Arbuthnot called the Brigadier’s body language “arrogant and intimidating”, unlike that of the other senior officer there. She said she had no doubt that alarm was caused to all three petitioners and distress to at least one of them.

The Chief Magistrate delivered the judgement under Section 4A of the Public Order Act of the UK and imposed a lower notional financial penalty, but did not consider it appropriate to issue a warrant, the statement of the Ministry of Foreign Relations said. “The Judge, who had previously ruled that the defendant was not protected by diplomatic immunity, did not revisit that ruling. She had also rejected the abuse of process argument.”

“The Government of Sri Lanka continues to maintain that Brigadier Fernando as a diplomat who was attached to the Sri Lanka High Commission in London is entitled to diplomatic immunity as per Article 31 of the Vienna Convention on Diplomatic Relations of 1961,” it said.