Former CM Berty Premalal lost the battle. Sworn in as a member of NCPC 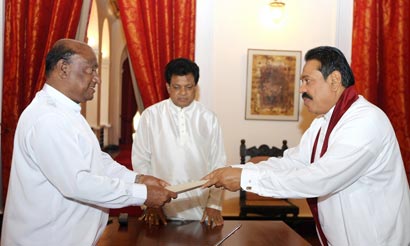 Former North-Central Province Council (NCPC) Chief Minister Berty Premalal Dissanayake who demanded that he should be reappointed to the post was sworn in before President Mahinda Rajapaksa as member of NCP Council at President’s House last night. Dissanayake was a notable absentee at the official swearing ceremony which was held at the Presidential Secretariat yesterday on 24 September.

Former Minister S.M.Chandrasena’s brother S.M.Ranjith of the ruling UPFA took oaths before the President as the new Chief Ministers of the North Central Province yesterday at the ceremony. He received the highest number of preferential votes in the Anuradhapura District with 105,232 votes beating former Chief Minister of the North Central Province and UPFA candidate Berty Premalal Dissanayake who received 95,027.

Former Chief Minister of the NCP Berty Premalal said that 120 local government members of the Sri Lanka Freedom Party will resign from their posts if he is not appointed once again as the Chief Minister of the province during a media briefing in Anuradhapura on last Thursday. According to the former Chief Minister, 120 out of the 154 SLFP local government members in the Anuradhapura district have made a written request to the President to appoint him as the Chief Minister. Berty Premalal Dissanayake added that the group had pledged to resign from all their posts if the SLFP took the wrong decision to appoint someone else as the chief minister.

However President Mahinda Rajapaksa on Sunday met with all newly elected members of the Sabaragamuwa and NCPC provincial councils and told them they should turn the victory towards working for the benefit of the voters. Both, Dissanayake and Ranjith have been advised not to make any more controversial statements over the Chief Minister’s post.

Meanwhile veteran actress Malini Fonseka resigned from her parliament seat yesterday. A ruling party UPFA National list MP, Fonseka handed over her resignation letter to the Elections Commissioner Mahinda Deshapriya and the Secretary General of the Parliament Dhammika Dassanayaka. Actress Malini Fonseka made this decision to pave the way for former Chief Minister of the North Central Province Berty Premalal Dissanayaka to enter parliament through the National list. Her resignation was not accepted by the President. Prior to that Minister S.M.Chandrasena also resigned from his cabinet ministerial post to pave the way for his brother S.M.Ranjith to become the new CM of the NCPC.

Finally, former CM Berty Premalal Dissanayake has withdrawn his previous decision and promised to remain as a member of the NCPC to serve the people in the province.

4 Responses to Former CM Berty Premalal lost the battle. Sworn in as a member of NCPC

Home » Former CM Berty Premalal lost the battle. Sworn in as a member of NCPC