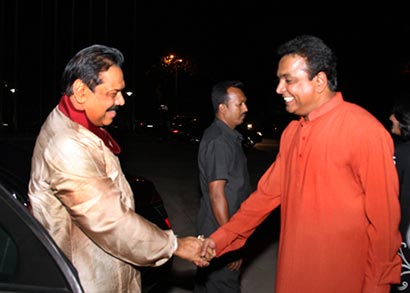 Former Navy Commander Admiral Somathilake Dissanayake was appointed as the Presidential Adviser on Maritime Affairs by President Mahinda Rajapaksa with effect from 08 October. He retired as the Sri Lanka Navy commander recently.

Admiral Dissanayake took over as the 17th commander of the SL Navy in January 2011. Admiral Dissanayake is regarded as the most decorated naval officer and is the recipient of Weerodara Vibhushanaya for his bravery and decorated for gallantry with two Rana Sura medals.

He has also been awarded the Vishista Seva Vibhushanaya, the Uttama Seva Padakkama and eleven commemorative, campaign and service medals.

Apart from his Navy career he is also a lyricist with a book ‘Sidupathi Kavu Gee’, a compilation of poems and songs written by him.