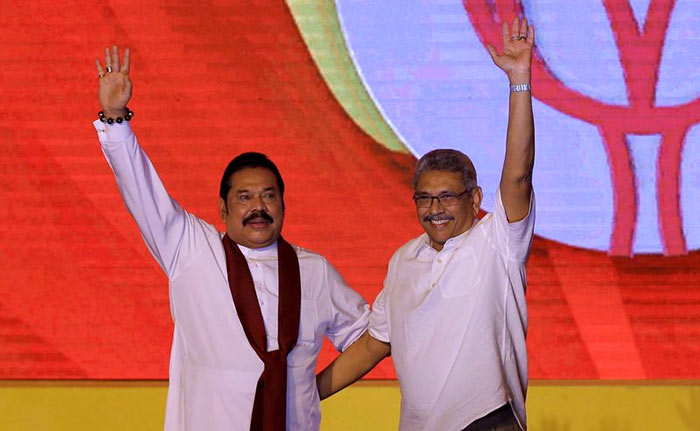 Nandasena Gotabaya Rajapaksa, who was a livewire in Sri Lanka’s military campaign to end a long civil war but faces allegations of human rights violations, was nominated Sunday as the opposition’s candidate for the presidential election scheduled for later this year.

Gotabaya, a brother of former strongman President Mahinda Rajapaksa, was a powerful defense bureaucrat under his brother’s government, which defeated the Tamil Tiger rebels’ 26-year insurgency in 2009.

Rajapaksa announced his brother’s candidacy to cheering supporters at a rally in Colombo, the South Asian island nation’s capital. Earlier at the rally, Rajapaksa was named leader of the Sri Lanka People’s Front, under which Gotabaya will contest.

“I hand over my brother as a brother to you. He is no other, he is Gotabaya,” Rajapaksa said.

Gotabaya is a hero to many majority Sinhalese, who see him as a prospective strong leader, but is feared by minorities and victims of human rights abuses.

As secretary of defense ministry under his brother’s rule, Gotabaya played a key role in ending the Tamil Tigers’ campaign for an independent state for ethnic minority Tamils. But he was accused of using extralegal methods and cracking down on those who criticized his style.

Gotabaya was accused of running abduction squads known as “white van” squads that whisked away rebel suspects and journalists deemed to be overly critical. Some of the abductees were released after torture, while others were never seen again.

Gotabaya was also implicated in the killing of rebels and civilians who tried to surrender with white flags under a pre-arranged deal in the final days of the civil war. Ethnic Tamils say they handed over their children for investigations at the request of the military but did not see them again.

According to a U.N report, some 45,000 Tamil civilians were killed in the last months of the war alone.

After the war’s end, Gotabaya also took up the extra role of city development in which he used the military to evict people from their homes for land acquisition.

In his speech on Sunday, Gotabaya said he has always strived to fulfill his duties to his best and in doing so he has never been confined to laid-out norms. He will follow the same philosophy even as president, he said.

“In fulfilling my duties for the country I have never allowed room for any foreign forces to interfere,” he said. “Even in the future I will never allow anyone to lay hands on the country’s sovereignty.”

In his years at the defense ministry, Gotabaya was known to be a straight speaker on foreign relations.

Gotabaya, a U.S. citizen, and has said he has started the process to renounce his American citizenship because Sri Lankan law doesn’t allow duel citizens to hold political office.

However, he has two court cases pending in Los Angeles filed by torture victims and a daughter of a top journalist killed in 2009. Gotabaya has denied the allegations, which his spokesman Milinda Rajapaksha says are politically motivated.

It is unclear if those cases will affect his candidacy. Hours before the rally on Sunday, U.S. Acting Assistant Secretary of State for South and Central Asia Alice Wells met Rajapaksa at his residence. It was not immediately known whether Gotabaya’s presidential candidacy was discussed.