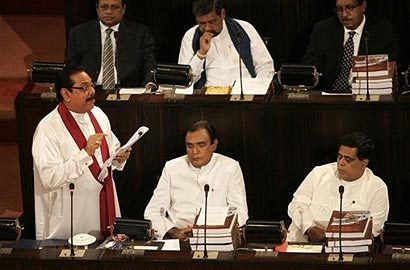 President Mahinda Rajapaksa in his capacity as Finance and Planning Minister yesterday presented Budget 2011 in Parliament which could be best described as futuristic. The total revenue and grants envisaged in the Budget amounts to Rs 986.1 billion where as the total expenditure proposed amounts to Rs 1419.9 billion. The Budget deficit which was eight percent of the GDP excluding grants in 2010 will be brought down to 6.8 percent under the current Budget.

A series of concessions have been given to industrialists, agricultural entrepreneurs and public and private sector employees under the Budget.

A highlight of the Budget is a proposed revision of salaries and allowances to public servants. All public servants will be paid a special allowance equivalent to five percent of the basic salary with effect from January 2011. Also increased is the Cost of Living allowance to Rs 5,850 per month, an increase of Rs 600.

University academic staff and staff grade researchers in other institutions will get a monthly research allowance equivalent to 25 percent to their basic salary. This allowance will be availed for two years from January 2011 during which period such research has to be completed and findings published.

The Budget outlined a simple income tax system. Current tax rates on personal income ranging from five to 35 percent will be reduced to a range of four to 24 percent. The tax free income threshold will be increased from Rs 300,000 to Rs 500,000 and the tax slabs will be increased from Rs 400,000 to Rs 500,000. This will also be extended to non- resident Sri Lankans. PAYE tax will be deducted only from employees earning over Rs 600,000 per year. The maximum tax rate under PAYE will be 25 percent. The new PAYE system will be introduced to the public sector as well. Terminal benefits from EPF will be exempted from tax.

A new employees’ pension fund will be set up to provide post retirement pension benefits to employees in the private and corporate sectors. For this purpose employees and employers will have to contribute two percent each to this fund. Employers will also be required to transfer the entire gratuity to his fund.

It was also proposed to set up an Overseas’ Employees Pension Fund (OPEF). Each employee is required to contribute at least Rs 12,000 to this fund per annum.

The Government will contribute Rs 1,000 million as initial capital to this fund.

Also envisaged is a Citizens’ Pension and Insurance Fund. The subsidy given to small holder tea growers will be increased by Rs 50,000 per ha. Rs 500 million has been allocated to provide subsidies for replanting, new planting, inter cropping and productivity improvements in the coconut sector. In addition Rs 200 million has been set apart to combat the disease affecting coconut plantations in the Weligama area. Subsidy for rubber replantation and new plantation will also be increased. In addition a 50 percent subsidy will be given to popularize the use of rain guards. A five-year tax exemption has been proposed for investments in seed farming. A three-year accelerated seed farm development initiative will be started from 2011 at a cost of Rs 700 million.

The Nation Building Tax will be reduced from three to two percent. The applicable threshold will be fixed at Rs 500,000. The Social Responsibility Levy, Rural Infrastructure Levy and Debit Tax will be abolished.

Rs 3,000 million will be allocated a period of three years to address economic difficulties of service men and women who have suffered during the war. It is proposed to grant an allowance of Rs 100,000 per family for a live birth of a third child of families of Armed Forces’ personnel.

Minimum floor rates of local telephone calls will be reduced from Rs 2 to Rs 1.50 per minute from July 2011 while a levy of Rs 2 per minute is proposed for an outgoing foreign call.

Concessions have also been given to gems and jewellery manufacturers by increasing their foreign exchange allowances.

Tax on profits of businesses engaged in the manufacture and distribution of liquor, cigarettes and also casinos has also been increased by five percent. Large amounts have been allocated for human resource development, ICT, health and education. The President also proposed to extend concessionary duty to import motor vehicles for professional and managerial categories of public servants working in the Government and public enterprises.