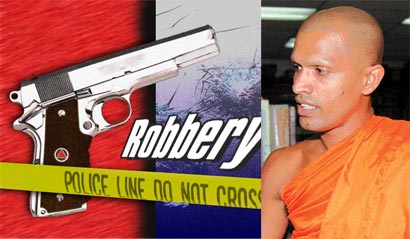 Following criminal investigations and arrest by the Police against Venerable Migettuwatte Sumitta, the Galle District Sangha Nayaka of the Asgiriya Chapter of the Siam Maha Nikaya, his Chapter has suspended his clerical titles.

The Asgiriya Chapter is the second largest group of the Siyam Maha Nikaya, the most powerful clerical group in the island.

Several news websites quoted Venerable Anamaduwe Dahmmadassi Thera, the Registrar of the Chapter as saying that the decision to suspend his clerical titles was taken after he was arrested by the Criminal Investigations Department of the Police  for aiding and abetting several robberies that took place recently.

The most recent one he had taken part in aiding and abetting according to police sources is the heist of nearly 40 million worth of cash and jewelry from a shop in Moragolla, Aluthgama.

A university graduate he served as Viharadhipathi , Induruwa, Bandarigoda , a head of a pirivena and he had authored several books in Sinhalese.

One website republished an interview ironically given by him to the Dinamina two years ago and quoted him as saying that the crimes in the country is due to the over indulgence of material comforts  people are seeking.

His  lawyers were quoted in the websites as saying that he had been framed up by illicit liquor merchants who wanted to operate close to the temple.