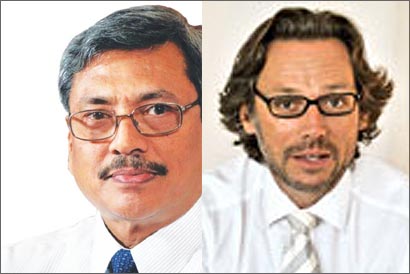 German Ambassador Jens Plotner has warned Defence Secretary Gotabhaya Rajapaksa over what he calls disproportionate use of police force during Monday’s clashes between the police and a large group of workers at the Katunayake Export Processing Zone (EPZ).

Ambassador Plotner, while acknowledging that tackling violent demonstrations poses a challenge to the police the world over, has gone to the extent of advising the Defence Secretary that Sri Lanka shouldn’t use excessive force. Alleging that the police overstepped their limits, the German envoy has warned that it could have extremely negative impact on existing and future German investments in Sri Lanka.

A senior government official told The Island that Ambassador Plotner should have written to External Affairs Minister Prof. G. L. Peiris and not to the Defence Secretary. Responding to a query, the official recalled how a section of the Colombo-based diplomats worked over time to deny GSP plus trade concessions in the wake of Sri Lanka’s military victory over the LTTE.

The German Ambassador has alleged that several German companies situated in the Katunayake EPZ had been affected by police excesses and that including the Special Task Force (STF) entered the premises of German companies and targeted workers within the buildings.

Ambassador Plotner wants Defence Secy. Gotabhaya Rajapaksa to launch an inquiry into police excesses and issue the orders to thwart recurrence of such incidents.

The government spokesman acknowledged that there had been a serious lapse on the part of the police due their failure to follow specific instructions given by the Defence Ministry with regard to ongoing trade union action at the Katunayake EPZ. The official said that the Criminal Investigation Department (CID) had arrested two police officers––one Chief Inspector and an Inspector––for allegedly shooting at the mob.

Police headquarters said that IGP Dr. Mahinda Balasuriya had accepted the responsibility for the incident and gone on leave prior to scheduled retirement on June 18, 2011.

Workers caused injuries to over 30 police personnel and one DIG, one ASP, seven Inspectors and 16 other rankers who had to be admitted to the National, Eye and Police hospitals, sources said. Sources said that those involved in the police operation had underestimated the threat posed by workers, who at the behest of their leaders, unleashed an organised attack on the police, thereby provoking an indiscriminate assault.

Two police officers, now in remand allegedly opened fire after one of the DIGs at the scene (not the officer receiving treatment at a hospital) ran into the Katunayake police station, grabbed a weapon and fired into the air to disperse the unruly mob. The two officers will be produced in open court today (3) at the Negombo Magistrate court. They were produced before the Magistrate at his residence on Wednesday and remanded till today.