Gone like a shot: Why did Sri Lanka reinstate alcohol ban for women? 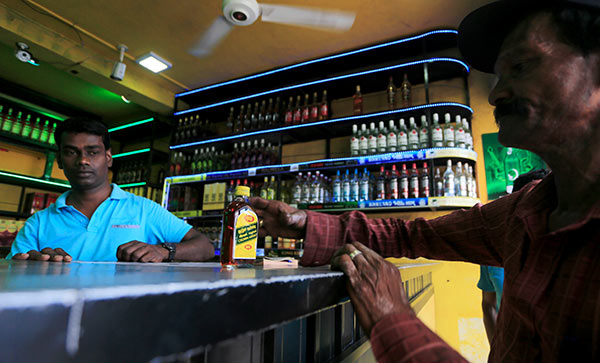 Even in ultra-conservative Saudi Arabia, women will finally get the right to drive cars this year. Compare that to Sri Lanka, where women recently won the right to buy a drink at a bar – or rather had won it, until it was revoked just days later.

“When the world is going one way, Sri Lanka is running a race to the bottom,” Thyagi Ruwanpathirana, a human-rights activist based in Colombo, said.

The Sri Lankan Finance Ministry announced in mid-January that it would lift a decades-old ban on women buying alcohol and serving liquor in bars and restaurants, putting the limelight on a law that few were even aware of. Indeed, in the fashionable pubs and restaurants of Colombo, it’s not unusual to see women, typically in groups, drinking freely. Yet just a few days after the announcement to lift the ban, President Maithripala Sirisena declared he wanted no part of the move, a call that was upheld by his cabinet.

Ranga Jayasuriya, a columnist for the country’s Daily Mirror blasted the move as a “cheap political trick”, saying the president was playing to supporters by making the announcement during a rally in a rural area.

“Needless to say that this arcane law is discriminatory against women – that it was never implemented may suggest that an average Sri Lankan bartender could perhaps be more enlightened than the head of state,” he wrote.

Welcome to the complicated world of Sri Lanka, riven by religious and ethnic tensions and still haunted by a civil war that lasted more than a quarter century before ending in 2009, leaving the Tamil minority crushed by the ethnic majority Sinhalese.

It is widely held that the government reinstituted the booze-buying ban on women after a backlash from conservative Buddhist elements in its Sinhalese base, which is an indication of the power they hold over the governing coalition.

Yet the move could expose conflict in the ruling coalition. Harsha De Silva, deputy minister for the Ministry of National Policies and Economic Affairs, protested the action via Twitter: “This whole alcohol ban is unfair and against the equality principle. Ban men too then.”

In many respects, Sri Lanka has made great strides since the end of the civil war. Cranes dot the country’s capital and a sparkling new skyline is emerging. It’s a major draw for Chinese investment. Construction of the massive Colombo Port City, funded by Chinese interests, is under way with the aim of building a modern financial hub on 269 acres of reclaimed land.

The Sri Lankan economy, buoyed by new investment and hordes of tourists, has expanded an average 6.2 per cent per year since the war ended, according to the World Bank. But the bank said the country’s economy was showing signs of strain under the weight of natural disasters, such as droughts, as well as a “complex” political environment – likely a reference to the rising tensions between the country’s main ethnic groups, which also include a sizeable Muslim population.

Late last year, 19 people were arrested as riot police were called in to quell clashes between Buddhists and Muslims near Galle in southern Sri Lanka. Scores of Muslim businesses, homes and vehicles were ransacked.

In October, a Buddhist monk and several others were arrested in Colombo after a hardline nationalist group staged a protest against 31 Rohingya Muslims who were seeking asylum from their embattled country of Myanmar.

Some believe that Sri Lanka, a tear drop-shaped island with glittering beaches and ancient ruins, could become the next Asian powerhouse. Indeed, China has been investing heavily in the country as part of its Belt and Road Initiative, due in large part to its strategic location south of India and astride one of the world’s busiest trade routes.

But seething ethnic pressures are a big impediment to the country’s ultimate success.

“It was predicted that the new nation would trump Singapore, South Korea and even Japan,” Gordon Weiss, wrote in the 2011 book The Cage: The Fight for Sri Lanka and the Last Days of the Tamil Tigers. “But Sri Lanka’s fault lines gave rise to surprising contradictions that foiled these glittering prospects.”

The government’s move to uphold the alcohol ban for women could rile a whole new segment of Sri Lankan society seeking change – women.

Women enjoy a high literacy rate in Sri Lanka. At 92 per cent, it’s comparable to the 94 per cent rate for men. But despite this, and the strong economic growth, their presence in the economy has been in retreat. The female participation rate in the workforce, according to the World Bank, dropped to 36 per cent in 2016 from 41 per cent in 2010.

This follows a similar pattern in nearby booming India, where the labour force participation rate for women has fallen to 28 per cent in 2016 from 37 per cent a decade ago.

Subha Wijesiriwardena, a feminist activist and blogger based in Colombo, slammed the government’s action as “archaic” and part of the government’s vendetta against women. “I was just completely outraged,” she said.

In upholding the alcohol ban, Wijesiriwardena does not believe President Sirisena was acting solely because of pressure from his constituency. She believes the move was part of his core values, which would dash hopes that the coalition government that took over from former hardline president Mahinda Rajapaksa in 2015 would be more progressive.

Ruwanpathirana, the human rights activist, sees the decision as illustrative of a deep-rooted patriarchy.

“We’ve seen this in the form of resistance shown for efforts to legalise abortion, impose a minimum age of marriage for Muslim girls, trying to decriminalise homosexuality. Patterns and attitudes become clearer, taken in context,” she said. “We can’t isolate this.”

3 Responses to Gone like a shot: Why did Sri Lanka reinstate alcohol ban for women?

Home » Gone like a shot: Why did Sri Lanka reinstate alcohol ban for women?