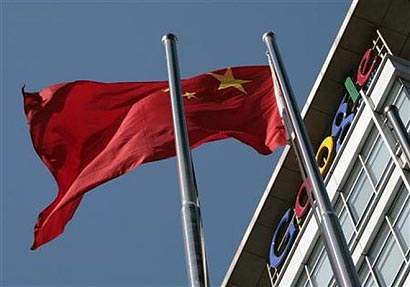 SHANGHAI/BEIJING (Reuters) – Google has postponed the launch of two mobile phones in China which use its Android platform, in the first sign its business in the country is starting to be affected by a dispute over hacking and censorship.

The manufacturers of the telephone, which was scheduled for launch in China on Wednesday, are Motorola and Samsung Electronics Co Ltd, and China Unicom would have been the carrier, a Google spokeswoman said.

A source familiar with the situation said Google Inc wanted customers to have a “positive experience” with the product, but felt that would be difficult considering the publicity surrounding the company in China at present.

Google said last week that it and other companies were targets of sophisticated cyber-spying from China that also went after Chinese dissidents, and threatened to pull out of the country.

It also said it no longer wants to censor its Chinese Google.cn search site and wants talks with Beijing about offering a legal, unfiltered Chinese site.

Analysts say that without search, Google’s most important business in China, the firm would struggle to retain a foothold is the world’s biggest Internet market by users.

The dispute could stoke tensions between China and the United States, already at odds over the value of the yuan currency, trade issues, U.S. arms sales to Taiwan and climate change policy.

Chinese officials have so far publicly fended off Google’s complaints and not openly flagged any talks with the world’s biggest Internet search company, which opened its Chinese-language search site in 2006.

“Foreign firms in China should respect China’s laws and regulations, and respect China’s public customs and traditions, and assume the corresponding social responsibilities, and of course Google is no exception,” Ma told a regular briefing.

Ma did not mention censorship as being among those responsibilities, but other Chinese officials have.

Until now, the Foreign Ministry had avoided mentioning Google’s name in comments on the dispute that has also drawn Washington into demanding an explanation from Beijing.

But Ma, like other Chinese officials, did not directly hit back at the U.S.

When asked again about Google’s complaint it had been hacked from within China, Ma said Chinese companies have also been hacked.

“China is the biggest victim of hacking,” Ma said, adding that eight out of 10 personal computers in China connected to the Internet had been hacked. This figure apparently included the many computers infected with viruses spread online.

Other countries are also being drawn into the dispute.

India’s national security adviser M.K. Narayanan told the London-based Times newspaper on Tuesday that his and other Indian government offices had been the target of hacker attacks originating from China on December 15, coinciding with attacks on Google and the other firms.

“There is no basis at all for this claim,” Ma said.

Indian commerce and industry minister Anand Sharma declined to comment on the report.

He said he had not brought up the issue with China’s commerce minister when they met in Beijing on Tuesday.