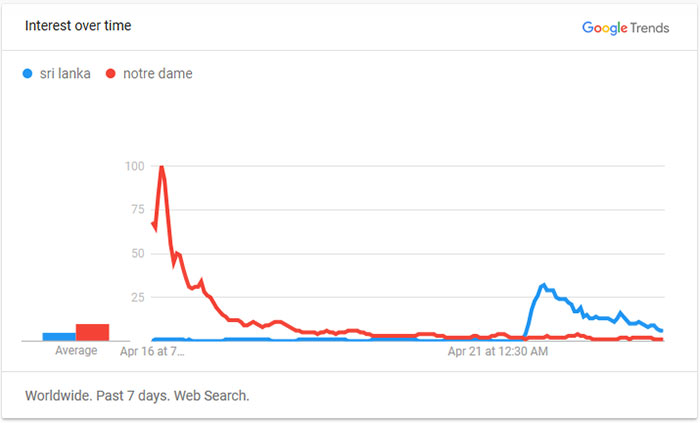 According to data retrieved from Google Trends, search results for both disasters have since plateaued, but comparisons between both stories reveal that worldwide search interest was at least seven times greater for the keywords “Notre Dame” over “Sri Lanka” during this past week.

Within 24 hours of both incidents, Trends says that the Notre Dame fire recorded between five and nine times more search interest than Sri Lanka.

There were no deaths reported in the April 15 fire which tore through Paris’ famous gothic cathedral, but analysis of the data reveals that it was only in three countries; neighbouring India, Indonesia and the United Arab Emirates, where searches for the Sri Lanka blasts outnumbered those of the Paris fire.

Al Jazeera’s data and SEO analyst, Gabriele Kahlout, said one of the factors behind the Notre Dame story’s greater search interest was its “closer to home” appeal for an English speaking Western audience.

“Conversely, in India, Sri Lanka is ‘closer to home’ and that why it was reflected more prominently in India’s search trends,” he said.

“We see this pattern all the time. When news of the Ethiopian Airlines crash broke out, Google Trends reported that people in America were mainly searching for American victims of the crash.”

More than 500 people were injured in the attacks in Sri Lanka on April 21, which saw a series of coordinated bombings at churches and hotels in the island nation.

Most of the victims were Sri Lankan, however, dozens of foreigners are also among the dead.

So far, there has been no claim of responsibility.

Sri Lanka’s health minister claimed that a local organisation was linked to the string of bombings.

While Google does not release the exact numbers of searches, according to Trends, France, Mexico, Argentina, Italy and Brazil all reported 90 percent more searches for Notre Dame than for Sri Lanka.