The Canadian Tamil Congress joins a list of 16 organizations that have been declared proscribed by the GOSL under UNSC Resolution 1373. The scores of other organizations formed on foreign soil liaising with these banned entities are culpable for every crime that the LTTE committed throughout 30 years of terror. Included to the list of LTTE fronts should be members of the Tamil National Alliance who took oaths from the LTTE leader Prabakaran when it first entered the political scene as political proxy of the LTTE. The UN Investigating panel cannot afford to whitewash these LTTE fronts now that they are named and proscribed and overseas arrests by foreign governments nullifies any excuse from the UN investigation panel if they are attempting to do so. All LTTE fronts including CTC must be investigated, charged for every terror attack the LTTE committed including the killing of Rajiv Gandhi.

CTC’s antecedents have been traced to the Federation of Associations of Canadian Tamils (FACT), a DBA of the LTTE which mysteriously disappeared after Human Rights Watch publicized its extortion activities in the Tamil community.

A report by the National Post of Canada revealed that “Canada’s Tamil community has been among the LTTE’s largest sources of funds, having contributed up to $10-to $12-million annually in past years,”

The Mackenzie Institute published a paper by Jeff Sole ‘Is Canada an unofficial State Sponsor of Terrorism’. The paper cited how LTTE were raising money from Canadians to fund suicide bombing.

Canadian journalist Stewart Bell contributor of many articles on terrorism and in particular the LTTE wrote “it is easy enough to set up a charity dedicated to a worthy humanitarian cause and launder the money instead to terrorist causes’. Is this not what all the Tamil groups who registered as ‘humanitarian’ organizations have been doing and continue to do?

For over a decade, CTC engaged in terrorist propaganda fundraising and weapons procurement before it could be designated under the United Nations Security Council Resolution 1373”. CTC activists David Poopalapillai has been designated under UNSCR 1373 which demands that the Canadian Government keeps a security/intelligence eye on CTC in Canada.

The ruling vindicates the case filed against Prof. Rohan Gunaratne who claimed CTC as a terrorist front though an exparte judgement was given in favour of the CTC.

CTC admits role in influencing the UN “As an organization which worked fervently towards the passage of this resolution, and towards the passage of its predecessor resolutions for the last five years—including attending Council sessions in Geneva, testifying at the UNHRC, and working closely with many different member states — CTC is pleased to see the advancement of this crucial step in achieving justice and accountability in Sri Lanka.” (CTC Press release)

CTC – ““We urge any community members who wish to testify before the UN investigative team to provide their contact information to CTC. We will compile the list and confidentially provide it directly to the UN investigation team if and when they make this request.”. The CTC is also canvassing Tamils to make submissions to the UN Investigation panel. With CTC being banned and designated an LTTE front, the UN investigating panel needs to ensure that submissions sent via CTC or promoted by CTC are singled out and not taken as valid.

“After thinking about this for weeks, my wife wrote a letter to the United Nations High Commissioner for Human Rights – a letter that changed the course of my life. As a result of this, we went to Geneva in March of 2009. We invited several other Tamils from different parts of the world to attend this meeting.

We made our case to the UNHRC Chief, Navi Pillai. Over the course of the next five years, I went to Geneva regularly – sometimes, both Harini and our toddler and I would go. We went for one singular reason – we could do more in Geneva with our skill sets than anywhere else. Yes we could protest — and we had. We could write blogs. We could get on every stage with hundreds or even thousands of Tamils and convince ourselves that we are on the right track. We could organise conferences, spending hundreds of thousands of dollars, we could do radio and TV shows, do call-ins, and just speak to and amongst the Tamil community. Maybe we should have done more of that. But we didn’t.

Instead, we focused on the issue of international accountability and were relentless. No one person can take credit for the resolutions in Geneva. Some have said that even if I hadn’t taken part, these resolutions would have gone through. And they are likely right. However the point is, over the course of 30 odd visits to the UNHRC, we were pursuing what we believe to be the right path—that is to seek accountability for war crimes, crimes against humanity, and genocide against Tamil peoples. I have been mischaracterized on the issue of genocide. It is true that I have not said the word genocide with every other breath — I have used the term strategically.

However, the fact that the current investigation includes an investigation into genocide speaks for itself — and this did not happen by accident. I have written and said that genocide took place against Tamils in Sri Lanka, and I have also explained the challenges in proving it from a legal standpoint, yet that doesn’t mean that we shouldn’t try. To all those who have singularly pointed out that I deny genocide took place, you have either been lied to, or are lying yourself and abusing an important issue for your own political ends.”

Anandasangaree and LTTE fronts may like to answer genocide questions

CTC links to other LTTE fronts 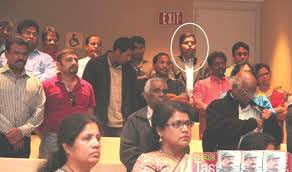 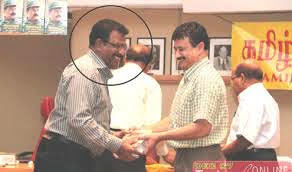 NOTICE THE IMAGES OF PRABAKARAN IN THE BACKGROUND LEFT 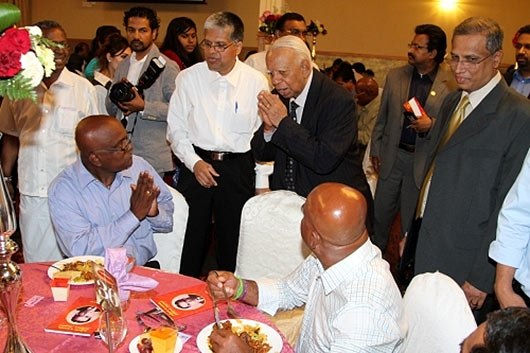 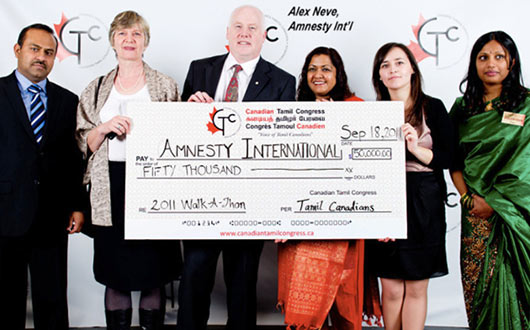 Ontario PC and Official Opposition Leader Mr. Tim Hudak made the announcement on the initiative to reintroduce the bill in Ontario to declare January as Tamil Heritage Month.

“Service Excellence Award” was awarded to the Sri Lanka based “Uthayan” Newspaper. Photographs of event :

Inspite of the links and intelligence information available on the links of CTC to other LTTE fronts including those banned by the Canadian Government, CTC events draw many Canadians which warrants the Canadian authorities to ask themselves how far they are willing to accept white collared terrorism inside Canada.

It is also a good time for Sri Lanka to take action against the Tamil National Alliance for its continued links and association with the entities banned under UNSC Resolution 1373.