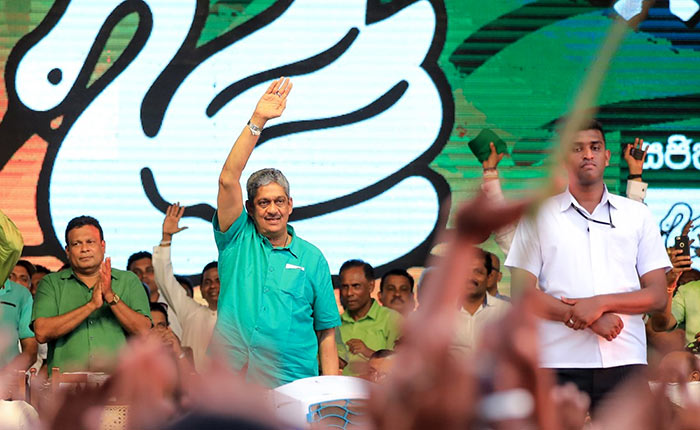 The Sri Lanka Podujana Peramuna (SLPP) Presidential hopeful is not qualified to make statements on national security even though he talks so much about it, Field Marshall Sarath Fonseka said at a press briefing held last week in Colombo.

The Army chief who led land troops in the final war against the LTTE said he never received any advice from Gotabaya Rajapaksa with regard to the war in his capacity as Defence Secretary.

“In January 2008, I deployed a battalion from Welioya to go towards Mullaitivu. At that time Gotabaya asked me about the possibility of deploying a separate battalion between Mannar and Vavuniya. It was a time when the war was intense in the Mannar front. However, my plan was not to go forward from those ends. But Gotabaya did not understand those plans and he still does not” Fonseka said.

Fonseka said neither Gotabaya Rajapaksa nor others knew the war strategy against the LTTE.

“Until we captured Kilinochchi and were leading to Puthukudiyiruppu, no one knew what my plan was” he said.

If his plan was revealed even at the Security Council, it could have been given publicity by the top officials, the Field Marshall explained. “I used to travel to the East, Vavuniya and Jaffna every week during the war. Gotabaya once accompanied me to Jaffna. But as he tells his plans to everybody before hand, the terrorists knew we were coming and started firing artillery to Palaly when we tried to land. So we had to turn back” he said.

He said, “I saw Gotabaya’s comments recently on the war that having an army of more than 500,000 and attacking the LTTE from the four sides was the secret behind the war victory. It is an answer even a waiter in a military base would give. The army never reached 500,000. It was mere 350,000 including the Tri-Forces, Police and the Civil Defence Force all together while the Army was only about 200,000”. Fonseka assured that he will work for the victory of the New Democratic Front Presidential candidate, Sajith Premadasa, even if he is not given the Ministry of Defence in a future government under Premadasa. “It never was my request. I think he (Sajith Premadasa) has identified that we cannot be satisfied with the current security level of the country” Fonseka said.

6 Responses to Gotabaya gave no advice on war – Fonseka