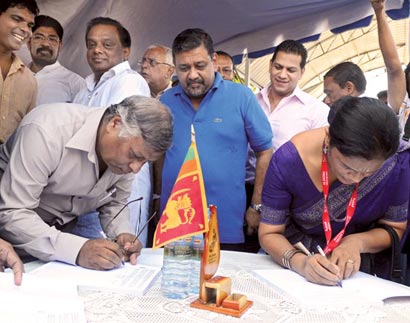 The government strongly objects to the publication of the report of the UN Secretary General’s Panel of Experts on accountability in Sri Lanka and to the taking of measures based on the recommendations made by the said panel since the panel is not appointed by the UN system, External Affairs Minister Professor G L Peiris said yesterday.

He made this observation at a press conference held to express the government’s stance in respect of the present situation springing from the report by the Advisory Committee appointed by the UN Secretary General to advise him on accountability issues in Sri Lanka.

Minister Peiris said that he would not make any comment on the contents of the report at this stage but was only objecting to the publication of the report as it is wrong and unacceptable and against the principles of the United Nations.

He further said that Sri Lanka has entered a new era accelerating economic development and facing the challenge of reconciliating between communities following the eradication of terrorism. He queried if the publication of this report of the advisory panel would unite and build reconciliation among the communities in this country or act otherwise.

The External Affairs Minister further said that the Sri Lankan mission received this report in New York on April 12 and rejected it as it was fundamentally flawed.

He also said that the representatives of various countries including the west appreciated the move by the Sri Lankan government to set up the Lessons Learnt and Reconcilliation Commission.

He added that this Commission will complete its work in May but the Advisory Committee of the UN Secretary General completed its report even without looking at the report of the LLRC which is against all principles.

Professor Peiris also stated that the UN system has to consider this advisory committee mandate to comment on Sri Lankan institutions, Sri Lankan jurisdiction, Court System etc. He added that the Sri Lankan government is asking the UN to refrain from taking steps that will make reconciliating the communities in Sri Lanka difficult.