H.E the Ambassador General (Retrd) Shantha Kottegoda, presents letter of credence to the King of Cambodia. 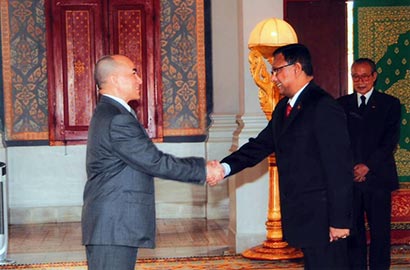 H.E General (Retrd) Shantha Kottegoda, Ambassador of Sri Lanka in Bangkok presented letter of credence to His Majesty Preah Bat Samdech Preah Boromneath NORODOM SIHAMONI, the King of Cambodia on 7th of September 2012, concurrently accrediting him as Ambassador to the Kingdom of Cambodia as well.

The presentation ceremony took place at the Royal Place where  the  Ambassador was escorted by a royal motorcade. The Deputy Prime Minister of Cambodia received him at the entrance of the palace and a ceremonial guard of honour  was  accorded.
During the audience, the King conveyed his best wishes to President Mahinda Rajapaksa and to the people of Sri Lanka. The King also congratulated  President on the achievement of peace and security in Sri Lanka.

The Ambassador having recalled the historical ties between two countries that date back to 12 th century based on ancient Buddhist links conveyed to the King the warm greetings and best wishes of  President Mahinda  Rajapaksa. He also conveyed the appreciation  of  President Rajapaksa  and the people of Sri Lanka for the valuable support  extended  by Cambodia in eradicating terrorism in Sri Lanka and also for preventing  terrorists  from operating from  Cambodian soil against the interest of Sri Lanka.