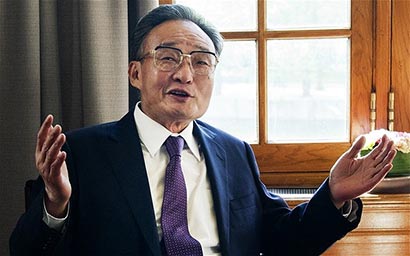 At the invitation of the Speaker of Sri Lanka Parliament Chamal Rajapaksa, the Chairman of the Standing Committee of the National People’s Congress (NPC), Wu Bangguo representing the higher echelons of the leadership of the People’s Republic of China made a first ever historic visit to Sri Lanka from 15 – 18 September 2012.   This visit marked an important milestone in Sri Lanka-China relations particularly in consolidating friendly ties and setting the tone for future cooperation between the two countries.

During his discussion with President Mahinda Rajapaksa on 17th morning, both sides acknowledged that bilateral relations based on historic and cultural affinities have further been reinforced building upon mutual trust and confidence. At the conclusion of this meeting 16 Agreements were signed ranging from visa exemption and marine development to economic and technical co-operation.

Chairman Wu noted that the All-round Cooperative Partnership initiated in 2005, should be the guiding light in evolving a new stage of cooperation in the bilateral relations.  In this respect the parties identified the importance of frequent exchanges of high level visits to inject new vitality to the existing relations.

China was pleased with the tremendous achievements made by Sri Lanka particularly after a near three decade terrorist conflict.  Chairman Wu commended the impressive 8% economic growth recorded by Sri Lanka consecutively and post war reconstruction efforts that are underway.  He was confident of the visionary leadership of President Rajapaksa in steering the country forward.

President Rajapaksa thanked China for the assistance extended for safeguarding Sri Lanka’s sovereignty and territorial integrity during the fight against terrorism and for the support extended to Sri Lanka particularly in the regional and multilateral fora and to forge ahead with post conflict reconciliation and rehabilitation programmes  involving all communities in the country.  Sri Lanka also pledged unstinted support to “One China Policy” and agreed to work together with China in regional and international fora on issues of mutual interest.  On forging mutual cooperation both parties agreed to give a new hype to economic relations between the two countries.  In this respect China agreed to provide further support to Sri Lanka for reducing the trade imbalance.  The NPC Chairman encouraged Sri Lanka to promote the country more vigorously in the Chinese market which would benefit Sri Lanka in enhancing exports and attract more Chinese tourists  to visit the country.

Reduction of import duties on Sri Lanka’s exports were also discussed within agreed framework arrangements and it was promised to facilitate more market penetration opportunities to Sri Lankan  export products to China.

The opportunities available in Sri Lanka to attract Chinese investments were also discussed.  Chairman Wu noted that China so far made outward investments to the tune of over 74.6 billion USD.  He also explained that Sri Lanka should be in a position to attract a sizeable portion of these investments due to the durable peace and political stability in the country at present.

Tourism resource development was another area for co-operation agreed by both parties.  Chairman Wu elaborated on the advancements made by his country on infrastructure development and pledged further support to Sri Lanka in this area and also in sharing Chinese expertise.  Collaboration on oceanic and agricultural cooperation were also proposed with a focus on marine and scientific research, preventing climate change and  natural disasters.  China also pledged support to Sri Lanka in capacity building in these areas.

On agriculture cooperation, China spoke of the advancements that have been made in their country and offered assistance to Sri Lanka on animal husbandry, biomass & energy production and agriculture product processing in Sri Lanka.

Both sides also supported each other’s candidacies in the multilateral fora.  China offered to work with the Shanghai Co-operation Organization (SCO) member countries in consensus building on elevating Sri Lanka’s participation as an observer and expressed interest to cooperate closely with South Asia through SAARC.

On 17th afternoon, Chairman Wu visited the Parliament of Sri Lanka, where he was welcomed by Speaker Chamal Rajapaksa and other important dignitaries.  At a large gathering of the Sri Lanka’s legislative body Chairman Wu spoke of the future progression of bilateral relations attaching greater importance to strengthening contacts between the parliamentary friendship groups, young parliamentarians and also the provincial authorities to further consolidate State to State relations.  Speaker Chamal Rajapaksa referred to his recent successful visit to China in facilitating a deeper understanding of each other’s social systems for relations to grow.

Chairman Wu during his stay also visited the Independence Square, the Colombo South Container Terminal Development Project which is a joint venture of US $ 500 mn, and the  BMICH which stands as an edifice of the monumental friendship between the two countries.

The Official Visit by the Chairman of the Standing Committee of the National People’s Congress of China to Sri Lanka heralded a new chapter in Sino-Sri Lanka relations in pursuit of common endeavors towards strengthening closer friendship and co-operation between the two countries.