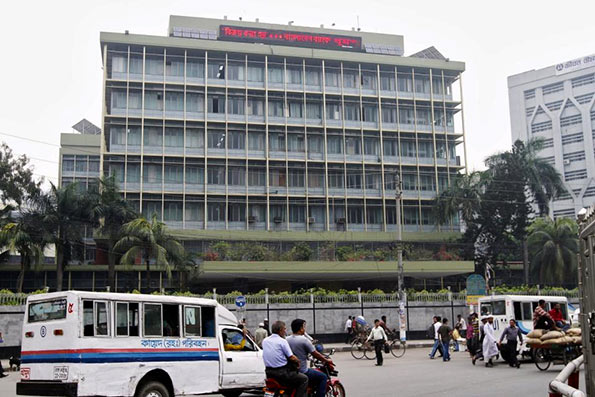 Hackers stole $100 million from the account of Bangladesh’s central bank at the Federal Reserve Bank of New York last month, laundering the purloined funds through Sri Lankan banks and casinos in the Philippines.

Bangladesh officials are blaming the New York arm of the U.S. central bank for allowing the transfer to go through and on Tuesday threatened to sue, but are also reportedly investigating whether the theft was an inside job by employees who had access to the proper transfer codes. The Fed has denied that its systems were hacked.

The money was moved out of the Bangladesh bank’s account on Feb. 5 using the Society for Worldwide Interbank Financial Telecommunication system, known as SWIFT, which is one of the secure messaging platforms used to transmit money transfers around the world between banks.

Fed officials haven’t said much other than to deny any breaches at their end. “There is no evidence of attempts to penetrate Federal Reserve systems and no evidence Fed systems were compromised,” the bank said in a statement on its official Twitter account.

Bangladesh Finance Minister AMA Muhith, speaking at a press conference on Tuesday, said the central bank planned to sue over the lost funds, despite the Fed’s statements. “We’ve heard that Federal Reserve Bank of New York has completely denied their responsibility. They don’t have any right,” Muhith said at a press conference in Dhaka. “We’ll file a case against them. We have kept the money with them. They are responsible.”

At the same time, the bank is investigating insiders who had access to the SWIFT codes, the Dhaka Tribune reported on Wednesday. Only 5 out of about 30 SWIFT transfer requests made by the hackers on the Bangladesh account succeeded.

About $20 million of the funds that were transferred through Sri Lanka have been recovered, while authorities continue to purse the remaining $80 million that made its way to black market currency dealers in the Philippines, then to several casinos before going back to the dealers and out of the country. Bangladesh’s Financial Intelligence Unit is working with the Philippines Anti-Money Laundering Authority to trace the rest the money, Bangladesh officials said.

Hundreds of foreign governments including Bangladesh keep their dollar currency reserves on deposit at the New York Fed, in part to make it easy to invest in U.S. Treasury securities.