Hajj, an embodiment of sacrifice – President 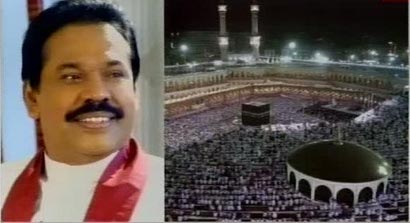 ‘I am pleased to send this message of greetings on the occasion of the celebration of Eid-Ul-Alha, the festival of Hajj, by the Sri Lankan Islamic community, together with their brethren the world over, states President Mahinda Rajapaksa in a Hajj message.

The message adds: “Culminating in the Hajj pilgrimage, this festival that is an embodiment of sacrifice, is the greatest annual event of the Islamic world. This year too, many thousands of Muslim pilgrims from Sri Lanka will join the millions of their fellow worshipers at the Holy City of Mecca to perform Hajj.

“Their coming together in sacrifice and prayer symbolizes the unity of the Islamic world, with those from different nationalities and cultures joining to proclaim the greatness of God – Allah.

‘In this spirit of unity nurtured by their faith, the Muslims of Sri Lanka have contributed significantly to the progress of our country and all our people. The celebration of Hajj with a shared spirit of joy should strengthen their commitment to live in harmony with all other communities in the cause of peace, reconciliation and national unity.

‘I wish all Muslims of Sri Lanka a happy and peaceful Eid Mubarak.’

It is with immense pleasure that I send this message to the entire world Muslim community on the occasion of the Hajj Festival, the day of worshipping Almighty Allah in one determination, states Prime Minister D M Jayaratne in a Hajj message.

The message adds: “On this occasion as well, all arrangements have been made to conduct the annual Hajj pilgrimage in the Sacred City of Mecca in Saudi Arabia for the promotion of co-existence among the world Muslim community.

“As in the previous years, a group of nearly 3,000 Islamic pilgrims have left for the sacred city of Mecca on holy pilgrimage this time too.“On this occasion I wish to remind that each and everybody in Islamic faith should pray to God for a society of equality which may safeguard the rights of themselves as well as the other members of the community by following the path of Almighty Allah’s teachings that advocate more devotion, inculcating moral values, to make one’s life physically and spiritually successful. “It is my earnest belief that all of us should step forward leaving caste, creed and religious differences behind, to bring the country forward under the outstanding leadership and unwavering devotion of President Mahinda Rajapaksa for the interests of the land being true Sri Lankans. “The people of the country can be then lined-up under the theme “Move the country forward” by standing together hand in hand for the sake of aspirations of everybody.

“Hence, on this holy day of Haj Festival, let’s pray for Almighty Allah, to bless all the Sri Lankans with strength, compassion and love for that endeavour.

The greatest sacrifice of the Prophet

I consider it as a great privilege enabling me to send this message of felicitation from the Holy City of Makkah. I take this opportunity to seek Allah’s mercy on all human kind and people of different strata. Especially I am praying that Allah must clear various inhibitions that have afflicted the followers of Islam.

The Hajj signifies the greatest sacrifice of the Prophet Ibrahim (alai), who had no hesitation to sacrifice his own son Ismail (alai) in order to obey the command of the Almighty. Allah does not need blood or flesh. What he wants is our total dedication and commitment towards Him and Him alone. How do we attain this stature? It is through annihilating the evil qualities of dabbling in useless matters, probing into others’ personal affairs and thinking of one’s ownself as superior.

My dear brothers and sisters, if you can avoid all this evil qualities, you could become a true Muslim and a good human being.

May Almighty Allah bless us well in the coming year!

Peace and unity of the Muslim Ummah

Today, as the Muslims throughout the world are celebrating the Hajj Festival known as the festival of sacrifice, I am happy to convey my greetings and good wishes to my Muslim fraternity.

The message of Hajj emphasizes the peace and unity of the Muslim Ummah. Allah has made it a duty upon every Muslim who has the means to perform Hajj but unfortunately all Muslims who are eager to perform the duty do not get the opportunity and now due to the over-crowding in Hajj, the Makkah authorities are compelled to restrict admissions of Hajj pilgrims into Makkah. Fortunate are those who get the opportunity to perform Hajj. It is rather the choice of Allah that they have been allowed as the guests of Allah, in his own house the Baithullah.

In the past, for over thirty years many Muslims in Sri Lanka were unable to perform at least for one time their life’s ambition due to the ruthless terrorism that ruled the country. Luckily the government was able to successfully bring to end and eradicate totally terrorism and free the country and people. However, international conspiracies are at work against our country as well as the Muslim world that supported Sri Lanka in its fight against terrorism.

On this Hajj Festival Day Muslims should be conscious of this fact and should show solidarity with the Muslim world and strive in every manner to drive away the anti-Islamic elements as in Hajj the Hajees jointly drive away the ‘Sheithaan’.

It is a good thing for Muslims who are not at Hajj to think as though they are in Hajj and perform as much as good deeds to fellow Muslims and to think and act in unison. The Muslim should totally submit himself to Allah from wherever they are. They have an important duty in that to establish national peace and create a friendly environment for people of all communities to live peacefully with dignity and honour. On this happy occasion, I appeal to my Muslim brothers to pray for peace and national unity. I send them my good wishes for a happy Eid Mubarak.

The true spirit of sacrifice

We celebrate Eid ul-Adha today (27), fervently praying to the Almighty Allah in the true spirit of sacrifice to help us to overcome the daunting challenges we are faced with. These challenges are both internal and external. The Muslim Ummah (Community) all over the world faces another Eid ul-Adha amidst extremism and intolerance. There is presently a greater need for Muslims to protect their identity and religion. Sacrifice is the basic need on which rests good and successful lives of ordinary humans. Today, we partake in commemorating Prophet Ibrahim’s willingness to sacrifice his beloved son Ismail for Allah.

Without sacrifice, life is but a passing dream with no peace, harmony and co-operation. Our inability to make sacrifices will make us prone to conflict, encourage self-centered behavior and easy gratification of desires. It is only with our willingness to sacrifice that we can achieve the cohesiveness and strength of our community.

As a leader of a political party, I should perhaps express the spirit of sacrifice as a struggle that must be waged endlessly to make our faith a living reality. Nothing in this world can be obtained without effort. Our purpose in life needs to be guided by Islam. The nature and the scope of our struggle and sacrifice must be commensurate with the value of the goals we strive to achieve. Let us be humble. Our most ardent efforts may turn out to be imperfect. We may waver and falter. We may be reduced to despair. We are only human. The Almighty Allah looks at our intentions. So let us all turn to Him when our human failings overcome our intentions. Let us beg forgiveness for our shortcomings and failures on this Holy day.

Time for reflection on sacrifice

Haj is a time for reflection on sacrifice and reassessment of one’s life during the past year, with a mindset to lead an improved one in the months ahead. Unity has been a key factor during this holy period as seen in the millions of peoples hailing from various parts of the globe thronging in Makkah, as witnessed in their circumambulations around the Ka’bah.

Muslims should seriously reflect on the Prophet Muhammad (owbp)s last sermon on Mount Arafat, and take heed of such profound advice and inculcate them into their daily lives.

We must not forget the Muslim refugees too in our isle whose expeditious rehabilitation to their original abodes becomes vitally important.

The government takes every effort to redress the gross injustice perpetrated on these poor folk. Sri Lanka enjoys peace and harmony amongst all communities in its real sense since May 2009 with the nation moving steadily but effectively towards progress and development.

I wish my brethren and all communities on this holy day of Haj and pray for progress and prosperity.

I have great pleasure in greeting our Muslim brothers and sisters in the country on this happy and solemn occasion of the ‘Hadj Festival’.

As you all are aware that Hadj being the fifth pillar of Islam, signifies self-sacrifices, piety and unity glorifying Islam. Several million Muslims from all part of the globe congregating in Holy Mecca and paying obeisance to Almighty Allah on this momentous occasion is in itself a living testimony to the sense of brotherhood that encompasses the Muslims of the Islamic and non-Islamic world. Let us take cognizance of this fact and lead a life of purity, upholding the great Islamic concepts and availing the opportunity to pray for the prosperity of Mother Lanka.

I wish you all a happy Eid Mubarak.

The generosity, enunciated by the Muslim Community in Sri Lanka through the Hadj Festival should be utilized for the development and progress of society, states Western Province Chief Minister Prasanna Ranatunga in a message to mark the Hadj Festival. The message adds that the assembly of tens of thousands of Muslims in Mecca to perform Hadj pilgrimage denotes the unity and fraternity of the human race.

The Chief Minister wishes to convey his greetings to the Muslim community in the country and very especially in the Western Province, for peace and prosperity.