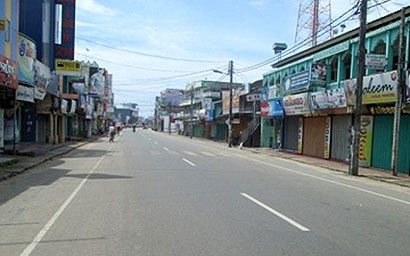 The Ampata District came to a standstill yesterday as the people observed a full scale hartal in condemnation of the violence unleashed on Muslims in the Aluthgama, Beruwala, Dhargaha Town and Welippenna areas in the South.

Normal day to day activities came to a standstill in these areas. Schools, banks, all government and private offices were closed and the streets were deserted.

Police, STF and Army personnel were deployed on the main streets and no untoward incidents were reported.

Sources said the towns in the Ampara District will stage a full scale Hartal today (19 June), too, in protest against these untoward incidents in Aluthgama, Beruwala, Dharga Town and other areas. Meanwhile, Mosques in the District made an announcement to the public and philanthropists to contribute whatever possible for the affected people in those areas.