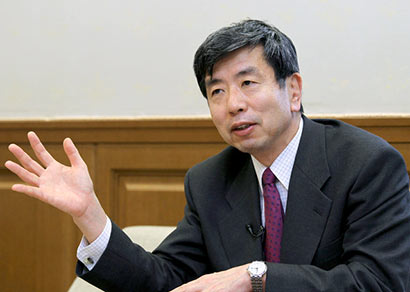 The President of the Asian Development Bank (ADB) Mr. Takehiko Nakao called on President Mahinda Rajapaksa this morning at the President’s House.

During the discussion, President Rajapaksa briefed Mr. Nakao on Sri Lanka’s post-war development. The President explained how the Government immediately attended to the resettlement of the internally displaced persons and the rehabilitation of ex-combatants.

“You must go and see the development yourself,” the President said to Mr. Nakao.

Sri Lanka joined the ADB as a founding member in 1966. According to the ADB, from then until the end of last year, the Bank has provided a total of $6.17 billion in lending and $358 million in grants. The ADB supports Sri Lanka in the sectors of energy, roads, water supply and sanitation, education and skills development, post-conflict reconstruction and water resource management.

“Sri Lanka’s social indicators are among the best in South Asia,” the ADB states on its website. “The country has achieved near universal literacy, and has a comparatively low poverty level. Economic growth has been steady since the military conflict ended, but slowed in 2012. Growth had, however, picked up strongly again by the third quarter of 2013.”