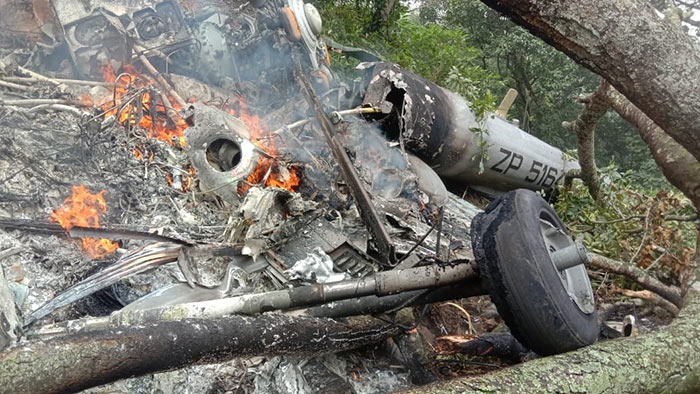 The Indian Air Force said in a statement that an inquiry has been ordered to determine the cause of the mishap.

The Mi-series chopper that crashed between Coimbatore and Sulur in Tamil Nadu was carrying CDS Bipin Rawat, his staff, and several family members.

From surrounding bases, search and rescue activities were initiated.

According to the sources, on board the chopper were 14 individuals, including Chief of Defence Staff Gen Bipin Rawat, his wife, his Defence Assistant, security commandos, and IAF pilots.

According to the sources, local military officers arrived at the scene and were informed that two bodies had been transferred to a local hospital with 80 percent burns.Only a few bodies may be seen downhill in the accident area. Efforts are being made to recover the bodies and verify their identities.

An IAF Mi-17V5 helicopter, with CDS Gen Bipin Rawat on board, met with an accident today near Coonoor, Tamil Nadu.
An Inquiry has been ordered to ascertain the cause of the accident.