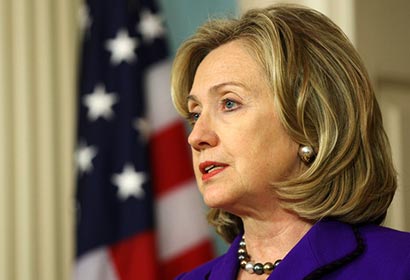 Secretary of State Hillary Clinton was hospitalized Sunday after doctors discovered a blood clot during a follow-up exam related to a concussion she suffered this month, her spokesman said.

She is expected to remain at New York Presbyterian Hospital for the next 48 hours so doctors can monitor her condition and treat her with anti-coagulants, said Philippe Reines, deputy assistant secretary of state.

“Her doctors will continue to assess her condition, including other issues associated with her concussion,” Reines said. “They will determine if any further action is required.”

Reines did not specify where the clot was discovered.

Clinton, 65, was suffering from a stomach virus earlier this month when she fainted due to dehydration, causing the concussion.

Clinton spent the holidays with her family last week after working from home.

She was scheduled to return to work at the State Department this week after being sidelined for the past three weeks. Her illness forced her to bow out of testifying December 20 before the House Foreign Affairs Committee on the deadly attack on the U.S. Consulate in Benghazi, Libya. Deputies Thomas Nides and Bill Burns appeared in her place.

The medical setback comes as Clinton is wrapping up her busy tenure as secretary of state, during which she has logged more than 400 travel days and nearly a million miles. She plans to step down from the post if and when Sen. John Kerry — President Barack Obama’s choice to replace her — is confirmed by the Senate.