Home should be secure place for child – President 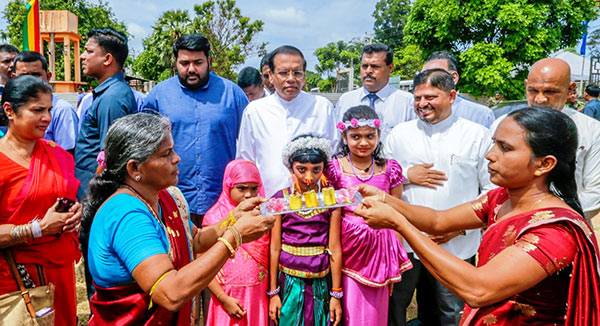 The home should be transformed into the safest and most secure place for the child generation which formed the life blood of the nation, President Maithripala Sirisena said.

The President made this observation delivering the inaugural address at a district conference under the Child Protection National Programme at the Killinochchi Madya Maha Vidyalaya grounds as the Chief Guest yesterday.

The President who said that children should be safeguarded at all costs added that ensuring a safe and secure life for children was the responsibility of everyone.

He said children in Sri Lanka too faced various problems like their counterparts in other countries and it was to pay special attention to children’s problems and bring urgent solutions to them that he launched the Child Protection National Programme.

The President said children more often encountered problems at the home front due to economic difficulties, liquor and drug addiction of parents and parents’ lack of proper understanding about their offspring and other reasons.

“There were rare occasions of children being abused by parents. This was a practice unacceptable in a disciplined society,” the President said.

The inaugural ceremony of this programme was held in September 2017 at the Digana Provincial Sports Complex in Kandy, at which the 2017-2019 National Plan was unveiled.

During the Killinochchi District Conference yesterday, several joint programmes were implemented by the Presidential Secretariat, Women and Children’s Affairs Ministry and several other ministries and institutions.

2 Responses to Home should be secure place for child – President

Home » Home should be secure place for child – President