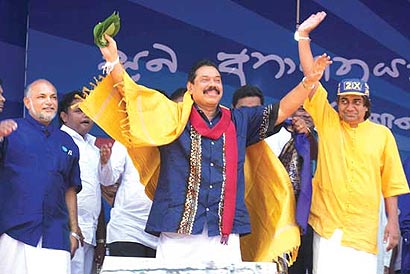 President Mahinda Rajapaksa yesterday emphasised that it would not be the number of votes garnered which would decide the fate of a candidate when it came to deciding the future ministerial positions, but their ability, commitment and productivity.

“I prefer a Parliament which could work more than talk. As such I would not hesitate to give pride of place to persons who could deliver desired results effectively when fulfilling peoples wishes,” President Rajapaksa said.

The President said so addressing a massive public rally in Welimada held in support of candidates contesting the April 8 Parliamentary polls under the UPFA banner. President Rajapaksa told the people of Badulla who had gathered in large numbers at Keppetipola, Welimada that their first duty was to ensure victory for the ‘betel’ leaf.

“A vote for “Betel” leaf is a vote for me, then you have three preferences. Use all three and appoint candidates of your choice,” he added.

The President pointed out that the UPFA had come before the people for another term after fulfilling its pledges given to the public during the last elections under Mahinda Chinthana.

On the occasion the President assured the public of the area that a number of projects which would benefit them were in the pipeline.

Already Rs 8 million has been allocated to solve the drinking water problems in the area and numerous other facilities to the farming community of the area too is in the offing, he added.

All 11 candidates in the district from the UPFA along with UPFA National List member and former Parliamentarian Sarath Kongahage and artiste and media personality Jackson Anthony addressed the gathering.

4 Responses to Huge manapeys no guarantee for Ministership – President