Hundreds of millions without power in India 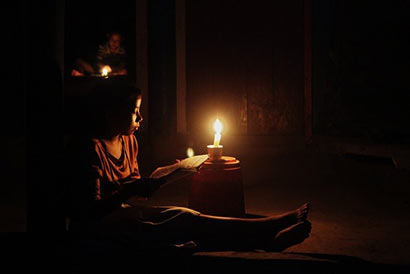 Hundreds of millions of people have been left without electricity in northern and eastern India after a massive power breakdown.

More than half the country was hit by the power cuts after three grids collapsed – one for a second day.

Hundreds of trains have come to a standstill and hospitals are running on backup generators.

The country’s power minister has blamed the crisis on states drawing too much power from the national grid.

The breakdowns in the northern, eastern, and north-eastern grids mean around 600m people have been affected in 20 of India’s states.

In a statement on national TV on Tuesday evening, Power Minister Sushil Kumar Shinde said he had appealed to states to stop trying to take more than their quota of power.

“I have also instructed my officials to penalise the states which overdraw from the grid,” he said.

Media reports in India have suggested that Uttar Pradesh is among the states that government officials have been blaming for the grid collapse.

But officials in the state denied this, saying there was “no reason to believe that any power operations in Uttar Pradesh triggered it”.

Anil K Gupta, the chairman of the state’s power company, called for “further investigation to ascertain the real cause”.

Also on Tuesday it was announced that Mr Shinde had been promoted to the post of home minister, in a widely anticipated cabinet reshuffle.

By late on Tuesday, officials said the north-eastern grid was fully up and running. The northern grid was running at 75% capacity and the eastern at 40%.

In Delhi, Metro services were halted and staff evacuated trains. Many traffic lights in the city failed, leading to massive traffic jams.

Much of the country’s railway network has started moving again, although a full service is not expected for many hours and there is a huge backlog to clear.

The failure on the northern grid on Monday also caused severe disruption and travel chaos across northern India.

One shopworker in Delhi, Anu Chopra, 21, said: “I can understand this happening once in a while but how can one allow such a thing to happen two days in a row?

“It just shows our infrastructure is in a complete mess. There is no transparency and no accountability whatsoever.”

In eastern India, around 200 miners were trapped underground as lifts failed, but officials later said they had all been rescued.

Addressing a news conference earlier on Tuesday, the chairman of the Power Grid Corporation of India said the exact cause of the power cut was unclear, he said, but that it appeared to be due to the “interconnection of grids”.

“We have to see why there was a sudden increase in load… we will make sure that such a situation is not repeated,” he said.

“Our message to people is that they are in safe hands, we have been in the job for years.”

After Monday’s cut, engineers managed to restore electricity to the northern grid by the evening, but at 13:05 (07:35 GMT) on Tuesday, it collapsed again.

The eastern grid failed around the same time, officials said, followed by the north-eastern grid.

Areas affected include Delhi, Punjab, Haryana, Uttar Pradesh, Himachal Pradesh and Rajasthan in the north, and West Bengal, Bihar, Orissa and Jharkhand in the east.

Smriti Mehra, who works at the Bank Of India in Delhi, said it had to turn customers away.

“There is no internet, nothing is working. It is a total breakdown of everything in our office,” she told AFP.

Across West Bengal, power went at 13:00 and all suburban railway trains on the eastern railways ground to a halt from Howrah and Seladah stations, the BBC’s Rahul Tandon reports from Calcutta.

However, the city is not badly affected as it is served by a private electricity board, our correspondent adds.

Power cuts are common in Indian cities because of a fundamental shortage of power and an ageing grid – the chaos caused by such cuts has led to protests and unrest on the streets in the past.

But the collapse of an entire grid is rare – the last time the northern grid failed was in 2001.

India’s demand for electricity has soared in recent years as its economy has grown but its power infrastructure has been unable to meet the growing needs.

Correspondents say unless there is a huge investment in the power sector, the country will see many more power failures. 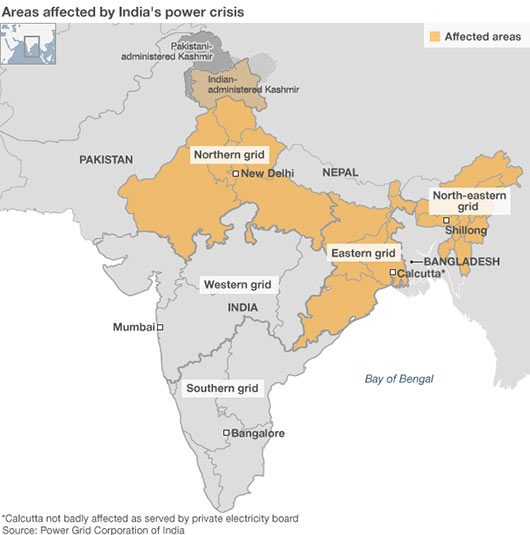 1 Response to Hundreds of millions without power in India

Home » Hundreds of millions without power in India