I will amend Constitution after our presidential candidate wins – Mahinda 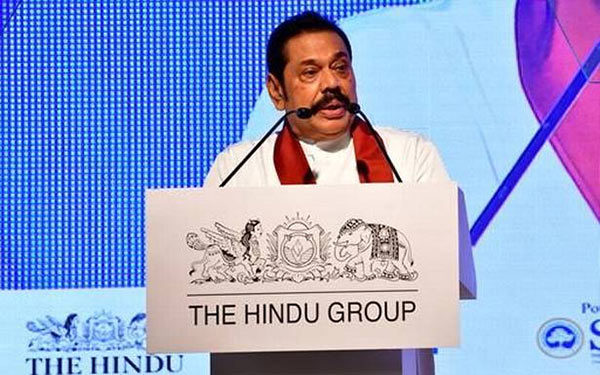 Former President Mahinda Rajapaksa said that the government change in India in 2014 resulted in a breakdown in the relationship between Indian and Sri Lanka, which he blamed on the lack of communication between the parties.

“Working relationship between the governments changed. Lack of communication between the parties seemed to have led to this situation,” he said addressing the event organized by India’s The Hindu.

“Communication is a vital factor that can make or break relationships. Misunderstandings of the ‘80s and 2014 could have been avoided with communication,” Rajapaksa said.

The Leader of Opposition was addressing the third edition of The Huddle, The Hindu’s two-day annual thought conclave, which got underway at the ITC Gardenia Hotel in Bengaluru on February 9.

He stated that even when Sri Lanka was engaged in a war against the “cruelest terrorist group” in the world, India’s relationship was friendly.

“India’s understanding was a key factor in eliminating terrorism,” he said.

Responding to a question regarding the next presidential poll, Rjapaksa says that they have to find a ‘good candidate’ for the upcoming Presidential Election as he himself cannot contest and that he will amend Constitution after their candidate wins.

Responding to a question regarding the issues of the Tamil community in Sri Lanka, Rajapaksa said: “People can be satisfied, but not politicians. My problem is that.”

“I believe that sharing ideas and learning from one another is key to understanding each other. India and Sri Lanka are one family, with shared cultural values. And with any family, the journey is not always smooth. Visits of the Buddha and later disciples are landmark moments in Sri Lanka’s history. Then, Mahatma Gandhi’s influence on national thought process. I see these as part of our relationship.

On the bilateral relationship, there have been good times and not so good. But it is important for both countries to understand the trends that impact both countries and best explore them to our mutual benefits. Both our countries have experienced the threat and terror of a few who work for their selfish motives. In the 80s, the LTTE found save haven in India and claimed the life of Rajiv Gandhi, killed 1500 soldiers. It was a troubled time in our bilateral relationship. The mistakes we have made, we learn from them. And move towards a future where mistakes are not repeated.

Two major breakdowns in our relationship happened in the 1980s and 2014. In the 70s, our ties reached a high. Both Prime Ministers had a personal friendship. I’m 1979, Moraji Desai said problems inherited from colonial past had been resolved. We’ve entered a new era of cooperation. Post-Independence, relationship between India and SL was good despite having contrasting ideologies: India being secular and socialist: SL being right wing and Pro-West. Nehru even convinced USSR that Ceylon was a sovereign nation.

Even when SL was engaged in a war against the cruelest terrorist group in the world, India’s relationship was friendly. India’s understanding was a key factor in eliminating terrorism.

On India’s dealing with SL, here’s my suggestion: If the outgoing party has given recognition to a working relationship with SL, then the incoming party should also give the same recognition. Changes in government have serious consequences for relationships and for both countries.

Strong mechanism at country-country level should be in place to clear any misunderstanding that may pop by from time to time. As long as countries understand the foundations of the relationship, nothing can be done to jeopardise the relationship. National security, social well being, political stability, economy, international transport will play a key role between the countries. National security is important given the destructive forces that have operated and will come up in the future.

We’ve a mutual obligation to ensure security of each other because we are geographically close. Maritime security has become an issue. It will be an important aspect of a well formed strategy. Vibrant, on-going dialogue will ensure each other’s national security. It should transcend normal dialogue process. Strong political leadership is a key factor for a stable relationship.”

Home » I will amend Constitution after our presidential candidate wins – Mahinda