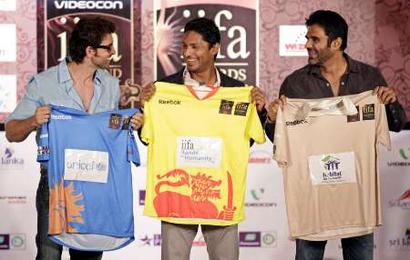 The country will be reputed as one of the best Meeting, Incentive, Conference and Exhibitions (MICE) destinations when Sri Lanka hosts the eleventh edition of the IIFA Indian International Film Awards from June 3 to 5. The Sunday Observer is the official print media sponsor. The key factor in Sri Lanka being selected for this prestigious event was the ending of the 30-year conflict under the leadership of President Mahinda Rajapaksa.

Peace, political stability and the scenic beauty of the country too made the IIFA organizers vote for Sri Lanka to host the IIFA event. Word of praise should also go to Sri Lanka Tourism for lobbying to make Sri Lanka the venue to this much looked forward global event.

The government will be investing around Rs. 6 million to provide logistics and other basic infrastructure. According to the Director General Ministry of Tourism, S. Kalaiselvam, the return on investment on this mega event will be in excess of Rs. 60 million.

The event will be watched over by millions of TV viewers from across the world and that will help promote Sri Lankan tourism.

“While the event would help build the image of the country which was tarnished by the 30-year conflict it will also increase the number of Indian tourists to the country,” he said.

The Indian arrivals are expected to increase by over 30 percent and the event’s publicity will encourage more high spending Indian clientele to visit the country thus helping to increase yields.

The IIFA in addition to bringing all the heart throbs of the Indian film fraternity to Sri Lanka it would also see many famed film directors and producers having a first hand look of the country.

“They have already decided to visit Kandy, Nuwara Eliya, the cultural triangle and the South and this will entice them to include Sri Lanka as a location in their future films opening a new market for the country,” he said.

Sri Lanka was also a popular Western film destination with successful movies such as Bridge On The River Kwaii, Mountain in The Jungle and many other movies being filmed in the country. Hosting the IIFA will encourage visitors from across the world to return to Sri Lanka.”

The Indian expertise will assist to refurbish the dilapidated Sugathadasa Indoor Stadium to international standards once again. The stadium which was built by the then President R. Premadasa to host the SAF Games in 1991 since then lost its glamour mainly due to administration lapses.

The IIFA will also provide opportunities for investments. The organisers have already arranged to host an investment forum where top Indian investors would participate.

The investment forum will be held on June 4, at the Colombo Hilton Grand Ballroom from 9 a.m. to 1 p.m.

This event is expected to be attended by over 1000 CEOs. The event will also enable over 300 Sri Lankan entrepreneurs to meet some of the world’s top Indian investors and they would be able to have joint partnerships.

The forum will focus on strengthening trade and communication ties between the two nations.

It will also showcase investment opportunities to potential investors. The forum will be broadcasted on CNN-IBN and CNBC once again enticing foreign investors to invest in Sri Lanka.

What has made Sri Lanka an investment paradise for Indian investors is the Free Trade Agreement between the two countries, Lanka’s unique geographical location, frequent air links and most importantly the investment friendly policies of Sri Lanka.

It is said that it is cheaper for Indian investors to manufacture products in Sri Lanka and re-export to India rather than producing in India.

IIFA will attract over 2,000 Indians and over 500 tickets would be sold for the Awards Nite. The City Hoteliers Association in a magnanimous gesture has decided to provide 2,000 rooms, free for the event.

In a bid to make the event a success and it has being decided to hire the Viceroy express train and the Luxury Hitachi train to transport the film fraternity from the Katunayake Airport to Colombo.

The National carrier, SriLankan has decided to increase their flights from Bombay for the event.

A star studded fashion show will be held on June 3, at the BMICH from 7 pm.

This will be followed by a film workshop at the Ceylon Continental Hotel the next day. It will be held in two sessions the first being for students, producers and upcoming directors. The event will include one-on-one meetings with Indian stars and directors.

T20 IIFA entertainment cricket match will be held at the SSC Ground on June 4. The teams competing will include past and present members of the Sri Lankan national side as well as members from the Indian national squad and Indian film stars. It is reported that Shah Rukh Khan will be captaining one side and Kumar Sangakkara the other.

The Sri Lankan team comprises, Muttiah Muralitharan, Sanath Jayasuriya, Kumar Sangakkara and Mahela Jayawardena, among many others. The Indian contingent prepared to put up the fight for charity include superstars, Shah Rukh Khan, Hrithik Roshan, Salman Khan, Suneil Shetty, Riteish Deshmukh and many more. As a symbol of solidarity with the Sri Lankan people, IIFA in partnership with Habitat for Humanity will adopt and rebuild a village for refugees, with the proceeds of the cricket match being donated to this cause, the IIFA Hands for Humanity project.

Speaking on his association with the IIFA Charity Initiative, Salman Khan said that he supports IIFA’s initiative that aims to give back to Sri Lankans, due to the recent hardships they faced.

“I am happy to be an ‘Ambassador of Change’ and believe that it is crucial to make a difference and contribute to this worthy cause. IIFA has successfully built bridges between countries over the past decade, and I hope this initiative will do the same for Sri Lanka,” he told Indian websites.

The much looked forward IIFA ceremony will be held at the Sugathadasa Stadium.

Five hundred fans could watch the stars in an enclosure as the stars enter the fully refurbished Sugadadasa Stadium to receive their awards. The event will also be screened at the Taj Samudra car park. Fans can enjoy this event outside the stadium where food stalls and entertainment will be arranged to watch the IIFA awards.

The actors nominated for this year for Performance in a Leading Role “Male are Aamir Khan for 3 Idiots, Amitabh Bachchan for Paa, Saif Ali Khan for Love Aaj Kal, Salman Khan for Wanted, Shahid Kapoor for Kaminey and Ranbir Kapoor for Wake Up Sid . The winner for Performance in a Leading Role “Female will be chosen between Kareena Kapoor (3 Idiots), Priyanka Chopra (Kaminey), Deepika Padukone (Love Aaj Kal), Vidya Balan (Paa) and Mahie Gill (Dev D).

The ‘Bye Bye Bollywood’ will take place at the Amuseam at Taj.

Mooted by Wizcraft International Entertainment Pvt. Ltd. and supported by the key members of the Indian film fraternity, IIFA is the most acclaimed South Asian film academy. Launched in 2000, IIFA is India’s biggest media event viewed by around 600 million people.

The first IIFA ceremony was held in London.

The IIFA awards have been held in Malaysia, Singapore, The Netherlands, UAE, England, and Thailand and South Africa. The next IIFA will be held in Toronto,Canada.