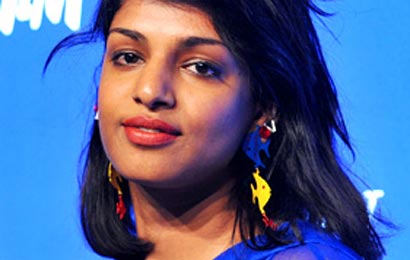 By now, you may have read the rather lengthy New York Times Magazine feature on M.I.A. (and if you haven’t, well, here it is). If you’re like us, there were probably more than a few passages that made you go, “Wait, what?”

Journalist Lynn Hirschberg pulled no punches while profiling M.I.A. — debunking her claims that she hasn’t seen her father in years, contacting the Sri Lanka Democracy Forum to balance out her version of the country’s war against the Tamil Tiger military group, pointing out that she lives in “very white, very wealthy Brentwood [California]” with her fiancé, Ben Bronfman — and, in the process, painted a less-than-flattering portrait of her. And boy, was M.I.A. mad.

Taking matters into her own hands, the singer posted Hirschberg’s phone number on her Twitter page, writing, “Call me if you wanna talk to me about the NYT truth issue, I’ll [be] taking calls all day bitches.”

And, of course, people called. Hirschberg, ever the pro, handled the stunt with cutting humor, telling The New York Observer that she found M.I.A.’s tactic “infuriating and not surprising. … She’s a provocateur, and provocateurs want to be provocative.” She added, somewhat hilariously, “The messages have mostly been from people trying to hook up with M.I.A. … If she wants to get together with John at Bard next week, I have his number.”

Hirschberg also said she wouldn’t be changing her phone number. M.I.A., seemingly still infuriated, took to her Twitter once again, this time writing, “News is an opinion! Unedited version of the interview will be on Neetrecordings [.com] this Memorial [Day] weekend.”

To that, Hirschberg told the Observer, “I have no idea what she’s talking about.”

A spokesperson for M.I.A could not be reached for comment on the Times article by press time.