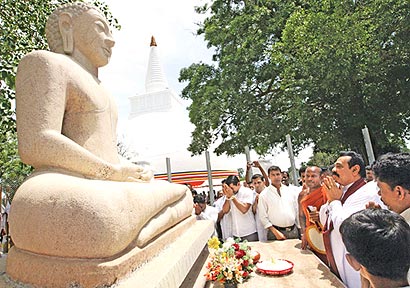 President Mahinda Rajapaksa participated in religious functions at the ancient Somawathiya temple in Polonnaruwa and Agbopura Rajamaha Viharaya in Kantale Saturday. President Rajapaksa who first visited the Agbopura Rajamaha Viharaya, opened the new shrine room of the temple. After taking part in religious ceremonies, he offered alms to the Maha Sangha.

The President also engaged in conversation with the devotees.

Buddhist Affairs Deputy Minister M.K.D.S. Gunewardene on the President’s guidance made arrangements for a meeting of Trincomalee district religious leaders belonging to all faiths at the same site Sunday.

The meeting which took place yesterday was organized to propagate religious harmony and create a disciplined and morally rich society. President Rajapaksa later visited the ancient Somawathiya sacred temple site which was affected by recent floods.

After taking part in religious functions, the President also took time off to have a friendly chat with the devotees.

The Somawathiya Chethiya is located by the bank of the River Mahaveli within the Somawathiya strict natural reserve and wildlife sanctuary.

During the reign of LTTE terror, the nearby villages were affected due to terrorist atrocities.